Quilts of the Past: Once Upon a Time

Okay, there's this Bloggers' Quilt Festival going on over at Amy's Creative Side, and I have a quilt to share.  It's an older quilt, like the one I shared last fall during the festival then.  And like that one, it was a group project from when I was a member of the informal "Hearts and Hands" quilting group that met at Peggy P.'s house back in Denver in the late 1990's.  I estimate I finished it in 1999, maybe right before we moved out here, although my memory's a little hazy.  And it must have been the pregnancy stress at the time, because I committed the cardinal sin of not making a label for it.  Shocking!  ... and shame on me.  In my defense, we moved twice during that pregnancy, my mother was diagnosed with cancer, and my daughter was born with Down syndrome, so I had other things on my mind. 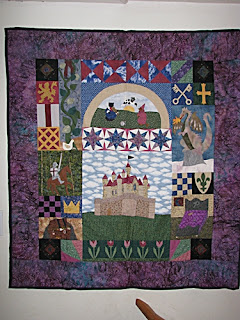 Once Upon a Time

The story:  This is a round robin quilt.  We all chose a theme and a color scheme, and we all made a theme block as a focal point.  We had a foundation grid of cheap lining fabric marked off into 4" squares.  Each month the box would travel to a new person, who was responsible for making the equivalent of 6 4" blocks that elaborate the theme. It could be one big block or several smaller "filler blocks, or a combination.  Blocks would get moved around the grid a little every month but I had the final say on how they would get arranged.  It was a lot of fun because every member of the group had a different theme: gardens, a Colorado mountain town, camping in the mountains, the seasons of the year, school... those are the ones I can remember. 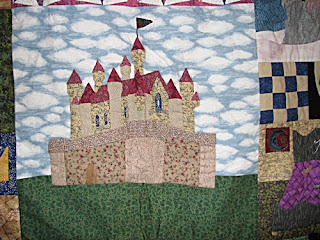 My theme block.  I was in my applique phase at the time. 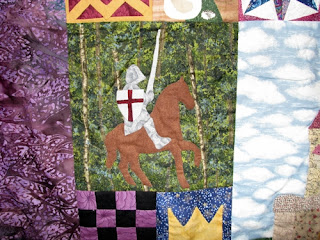 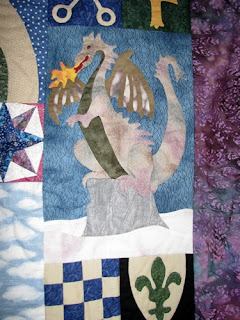 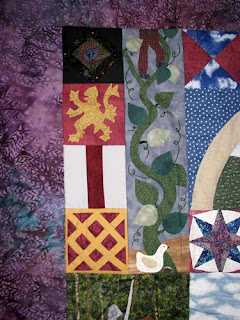 Jack and the beanstalk, the goose with the golden egg... 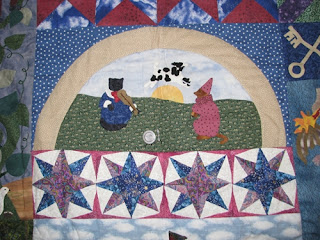 the cat and the fiddle, the little dog, and the cow over the moon (the dish and spoon are real little trinkets sewn on there)... 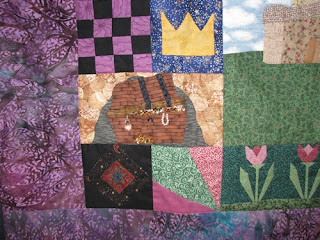 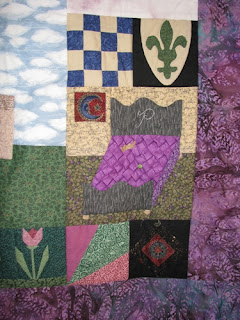 the princess and the pea.

This quilt hung in my oldest son's room from about the time we moved here in 1999 until we remodeled his room to get rid of the ugly old paneling the quilt was helping to cover up.  It might have hung in Secundus' room for awhile too, I'm not sure.  After the remodel at some point it got shelved because some of the treasure needed to be stitched back on, and I remembered it a few weeks ago when I was doing the intervention on Primigenitus' room while he was deciding which college to go to.  So I stitched the treasure back on (I had saved it in a special little bottle in my sewing room!) and hung it up in the upstairs hallway by the staircase.  It had been put away so long, the girls didn't remember it.  And they love fairy tales!  So it's enjoying a new round of popularity.

I couldn't possibly have made all these lovely blocks on my own, and I am honored and humbled that so many wonderful and amazingly creative ladies spent so much talent making them for me.

So glad this quilt has come out of hiding and is on desplay in your home once again. It is very fun and the colors and themes are wonderful.
Have a great day.
Always, Queenie

An unusual design and very good.

That is really special. Love all the details.

Check out my blog if you can...

A true story quilt, all those lovely details! Thank you for sharing!

What a great quilt!

what an absolutely fantastic quilt. so much thought and work went into it and it's wonderful. thanks so much for sharing and have a great day