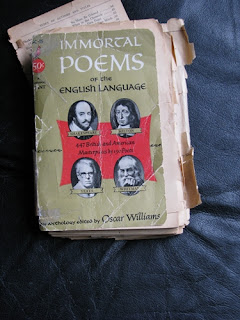 ... or rather, a recycling.  The sad truth is that Immortal Poems of the English Language, edited by Oscar Williams, in a cheap paperback edition probably dating from the 1950's when my late mother bought her brother's old textbooks in a bulk lot, was never holding up very well when I knew and loved it back in the 1980's.  I was a romantic teenager then, and I picked it up out of the jumble of other anthologies and history books in the spare room.  "I like poetry... I can even write poetry!"  (I wrote very bad poetry).  So it sat beside my bed for about a year, and every night I would read a few pages.  It changed my life. 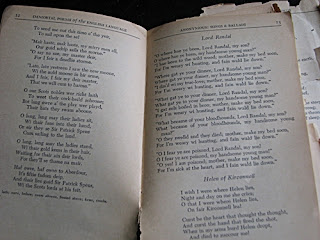 It started with the medieval songs and ballads, many of them anonymous, most of them gory and depressing, with the quintessentially British love of the macabre.  Just ask Lord Randal or Tom O'Bedlam.  It seemed to me, as I was working my way through the archaic words, that the medieval world was much more rich and satisfying, albeit dangerous, than the modern one.  Every so often there would be a poem where some even more archaic words were mixed with the medieval ones -- stepping stones from ancient times.  I think this must have been the first time I ever consciously wanted to study Latin, although I'd certainly read Myths of Greece and Rome and loved the stories: but I hadn't yet been captivated by the language itself. Even the moderns, though I preferred the older writers and could never memorize poetry that had no meter or rhyme, had an inspiring way with words that told me they were kindred spirits.

It took a long time to work my way through the Shakespeare section, but I felt that I had a good handle on the English sonnet form after that. 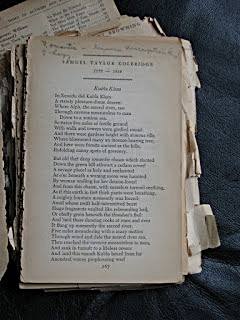 "Could I revive within me
Her symphony and song
...
Weave a circle 'round him thrice
And close your eyes with holy dread:
For he on honeydew hath fed,
And drunk the milk of paradise!" 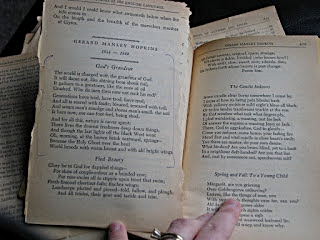 "The world is charged with the grandeur of God,
It will flame out, like shining from shook foil..." 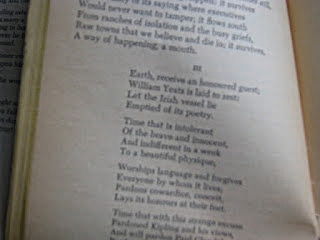 "Earth, receive an honored guest;
William Yeats is laid to rest:
Let the Irish vessel lie
Emptied of its poetry."

Yes, I'll miss this little volume.  But the poems themselves are, indeed, immortal.
﻿
Posted by Kathy at 5:11 PM