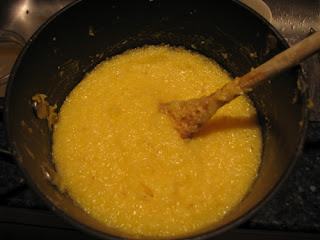 Grits.  Nature's perfect food.  That's what I crave when I've had a headache for four days running and wake up at 2:00 a.m. after a dream where zombies invaded my house and I had to live in the basement.  And then feel really queasy, like I'm coming down with the stomach bug that's going around at school, and can't get back to sleep, and come downstairs to play on the computer.  And then get ... well, hungry isn't quite the word, but it's a little like hungry ... you know, the feeling that you might be able to eat something, if only to keep from feeling worse ... at around 4:30 a.m.  Yep, grits (sold as polenta in the bulk bins at Winco) cooked for about 5 minutes in water with plenty of salt, 4 cups water to 1 cup grits.  Served hot with even more salt, butter, and maybe Tabasco sauce.  Sometimes Tabasco is okay with an iffy stomach; you just have to go with what sounds good.  This little pot of grits is seriously the only reason I was able to teach school at all Friday.  I had some at 4:30, a little more at 8:00, and then again when I came home for a late lunch around 1:30.  Except I melted some cheese into them then.  And I drank apricot tea.  I cannot ever have too large a supply of apricot tea.

I'm having a good randomday today.  I needed it after this week.  I needed not to have to run 20 different errands.  So I'm doing random stuff that I actually enjoy.  Like knitting: I'm several rows further along on the Traveling Companion shawl, and last night while watching Harry Potter 7 (part 2, first half) in bed I did the first beaded row on my Lady MacBeth stole.  Using dental floss!  How cool is knitting that you can turn dental floss into a creative tool?!  And my good friend Joyce gave me the viral pattern "Color Affection" that everyone else is knitting so in a very short time I may have three different shawls (that I won't wear) on the needles!  I don't know, that isn't excessive, is it?  It always seems that the closer we get to summer vacation, the more burned-out I feel and the stronger the call to just sit someplace kind of quiet and knit.

I've been playing my Civ4 game, the mod known as "Rise of Mankind" which is so complex it makes the game crash every 5 turns or so towards the end of the timeline.  I'm hoping I can play it through and win a cultural victory with 3 legendary cities.  I'm playing Empress Wu of the Chinese and the city of Guangzhou is already legendary.  Beijing, Shanghai, and Nanjing have a good chance of reaching legendary status if I keep building the right things there.  Very strange in a game of Civilization, I've only been at war once, and only for a short time, when Marcus Aurelius declared war on me in 1914 along with his vassal state, the Incans.  I was able to stop it with a resolution from the Apostolic Palace.  The real threat is Suleiman of the Ottomans, who has twice as many cities as I do but isn't as far along in culture or technology.  But even he is on friendly terms with me.  As for Mansa Musa, he is now my vassal state, after careful spy-work caused three of his cities to shift allegiance and become my cities.  Theodora, Abraham Lincoln, Isabella, and Ragnar are also kindly disposed towards me.  It is now 2014.  I do wish the game wasn't quite so glitchy, because it's going really well.

I made a double recipe of an old-fashioned recipe for rhubarb cake, but with plums instead of rhubarb.  One pan will go to church for fellowship meal tomorrow and the other will probably get gobbled up here.

I am supposed to do a detailed lesson plan using the 7 laws of teaching for Tuesday's inservice.  I think I'll just throw something together Tuesday.  I was rather annoyed by a recent email from a respected classical education source, which cautioned against the danger of teacher burnout (except they called it "dehydration") and implied that the remedy for it was - get this - MORE education!!  Can you imagine telling students 6 weeks out from summer vacation that what they really need is more classes?  Uh, yeah.  It went over about that well with me, too.

Okay, there are always more random things to gab about, but I'm done gabbing for the day.  It'll be less random until next week!
Posted by Kathy at 2:44 PM