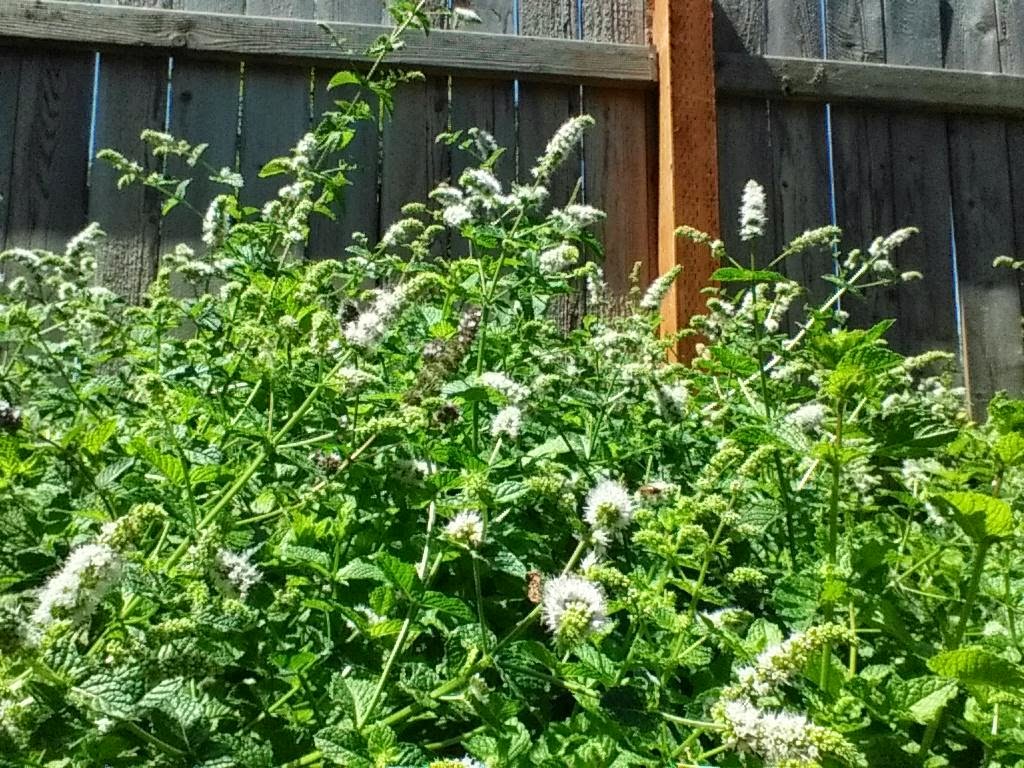 I took this picture yesterday, on my Kindle, because I was entranced by the hundreds of honeybees doing their thing in the mint patch. There are a couple of blurry golden patches in the sea of green -- those are bees  (it's kind of hard to aim the camera app).  It's been lovely weather for August here, breezy and in the 70's and low 80's.  I haven't felt particularly inspired to do much of anything (as you may have noticed by my lack of blogging).  There's going to be a steep price to pay come schooltime, I'm afraid.

I'm declaring plum season over.  There are about 25 quarts in the freezer.  Zucchini is coming in faster than we can eat it.  I haven't done any blackberry picking this year and probably won't.  The boys are gone - Daniel and Steve on their way to college because RA orientation starts early; Peter still plugging away through boot camp.  He's more than halfway done now but it is a privilege once a week if we hear from him for a few minutes. I've been worrying about him a lot this week as he's supposed to be learning grenades, and no mom ever wants to think about that.

Then, too, I could start worrying about a lot of the world's problems this week.  Genocide in Iraq, Ebola in Africa, baby Gammy abandoned in Thailand because he has Down syndrome, thousands of migrant children with no good options.  That's why it was good to be pleasantly surprised by the beautiful little bees when I went to pick a sprig of mint yesterday.  But it's hard not to worry.  The house is too quiet.

I've been working hard on language learning this summer.  Since discovering Duolingo last winter, I've finished two "trees" - Italian and French (French was review but Italian was all new).  I'm about 2/3 done with Spanish and almost halfway with German - but German is getting hard.  I've also started their beta version of Dutch, which is better than any of the others from a teacher's and learner's standpoint... but I'm taking it slowly because there is too much cross-confusion with German.  I don't really have any fear about learning languages now, and there isn't a whole lot of confusion really, when you are studying multiple languages at once.  It's kind of like having children -- once you've had your first and then adjusted to the extra chaos of the second, you more or less hit your stride and start going on muscle memory or maternal instinct or whatever works for the third.  It's not hard, it just keeps you very busy.  And even if you run through 3 or 4 names (including the pet's) before coming up with your own child's name, you both know what you meant.  I'm starting to be able to recognize some interesting patterns in language structure that I would never have figured out if I weren't obsessive about learning so many languages.  Maybe one of these days I'll dig further into that Proto-Indo European textbook.  But for tonight, I'm heading to bed.

I have started calling it Smeagol.  There is a squirrel that chewed a hole directly through the roof of the entryway.  There is a self-contained attic space there, with no access from the rest of the house.  Friday we had our friendly handiman come out and fix it.  The squirrel came out and ran away when he started working on it.  But today, danged if that squirrel wasn't back and gnawing at the new shingles over the patched spot.  We have been chasing it off on sight.  But I looked up squirrel repellent online and brewed up a strong tea of cayenne pepper.  I also read that squirrels hate peppermint oil, of which I had a little.  So this afternoon I climbed up there with Steve's help, and caulked the torn shingle after hiding a few cotton balls soaked with peppermint oil underneath.  Then I sprayed the cayenne tea over the ridge of the roof and as much other area as I could get it to cover, and we are really hoping that deters the Smeagol squirrel.

Other random matters: Quarta came back from camp this morning.  She was sick on the windy road home (nervous stomach and no breakfast) and spent almost the entire day sleeping it off.

Plum season is almost over.  I have no more energy for picking plums and doing things with them.  I did try this recipe for a Polish plum cake today.  We'll take it to fellowship tomorrow and see.
Posted by Kathy at 9:38 PM No comments: