More than the usual randomness today.

I don't care what color the dress is.  Let's just establish that right off.  While the civilized world debates the color of a dress that has been passed through photoshop a few too many times, the Islamic State is committing genocide in the Middle East and Putin is working on combining the less-attractive characteristics of Stalin and Hitler and resurrecting the Soviet Union, but with less noble ideology.

And I am rather torn up about Leonard Nimoy.  I need to play Civ4, just to hear his voice narrating the newly discovered technologies.

We will be hosting our first ever Latin Olympika at Cedar Tree next week.  I'm not the one organizing it but I've spent all day for the last two Saturdays putting test material together.  Last week was the Level I Certamen; this week was the four individual subject tests in Roman Culture, Roman History, Derivatives and Mythology.  They were a little more fun to put together because I wasn't so worried about having to follow a certain specific format.  I have no idea if they will be too hard for the students though.  Unfortunately all this special event planning puts me behind in the data entry of regular grades.  Sometime I have to catch up.

The squeamish part of me (which is pretty significant) is still recovering from a secondhand account of Peter's morning, which involved the execution/culling/euthanasia (not sure what is the right term) of an unwanted goat for a friend, and a lingering smell of goat when he came back home (plus he brought back a horn as a trophy... ew!)  Steve says he doesn't know what goat smells like.  But I do.  When I was 4 or 5, we had an old-fashioned country doctor who said I was allergic to cows' milk and should drink goats' milk instead.  (I think he got kickbacks from the farmer).  We went to the goat farm once a week to pick up my milk and I remember drinking it most of the way through kindergarten until it became too difficult for my parents to get, or something.  I could tolerate it, but I never liked it.  My feeling on the matter is that if I really am allergic to milk, I will drink soy, almond, coconut or just plain water rather than going back to goats' milk.  But I doubt I was ever allergic to cows' milk.  I think it was just because I had tonsillitis several times that year.

This afternoon as I was driving out of the driveway, a raccoon was calmly climbing into the spruce tree as I went by.  Now there's an animal I'd like to see put down.  Broad daylight, bold as could be.  Unfortunately all I could do was yell at him and tell him he's not welcome in our yard.

I shopped at Goodwill with Tertia for a bit, then had to leave to pick up Quarta from where she was learning to make stage hairpieces for the upcoming Sherlock Holmes play.  On my way out of the parking lot I was flipped off by a couple of baby boomers who were apparently dissatisfied with the way I backed out of the parking spot.  As near as I can reconstruct it, they were at 4:00 and I have no way of telling who started backing out first because when I heard a little horn tooting I looked at the guy at 8:00 who was farther out than I was but I had to move before he could anyway, and there was a pedestrian at 6:00 that I had to let past too.  So by the time I had righted myself and was going forward Mr. Rudeski was giving me the finger, and when I turned right out of the lot and they screeched left at the same time (so they hadn't really lost any time even if I had held them up), Mrs. Rudeski was doing likewise. I guess they deserve each other.

Daniel is on Spring break, which he is spending with his roommate's family in North Carolina.  I wish it wasn't so far away or so expensive to bring him back.  They've had incredibly cold weather in Pennsylvania.

Yesterday we went out to the Saigon Restaurant and had a really nice meal -- everyone liked everything, and we shared around family style.  Salad rolls, beef curry in peanut sauce, pork with vermicelli noodles, shrimp chow fun, pad thai, garlic chicken and a big bowl of pho, which inspired a lot of punning.  Don't make a faux pas while you're carrying your pho.  Plenty of leftovers for tonight, which was nice.

Tomorrow is a fellowship meal at church and I made a double batch of pflaumenkuchen.  It may be winter in Pennsylvania but the daffodils are starting to bloom here, and Steve spent a lot of today pruning the grape vines and shrubbery.  There have been a few days this week where I haven't needed to wear a sweater, although it's probably better to keep one handy even so.
Posted by Kathy at 11:00 PM No comments: 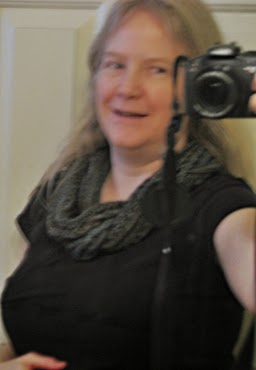 A knitting object has been finished at long last!  This is Azzu's Shawl, a free pattern, knit in the skein of Tosh Merino Light (colorway "Chickory") that I bought at Urban Wolves last fall.  It has been my main knitting project for several months, which pretty much tells you I have not been squeezing in much knitting time.  Also, obviously from the picture, my selfie-taking skills are nonexistent.  I discarded about 12 shots that were much worse than this one.

I have been wearing it a lot.  I'm not usually one to wear shawls and I like this way of wearing a narrow shawl/scarf better than a bigger shawl worn draped in a wannabe artsy way that I could never quite manage.  The color is a moody gray-blue; a perfect match for my eyes, the local prevailing weather, and my prevailing emotional state -- this picture might show it a bit better. 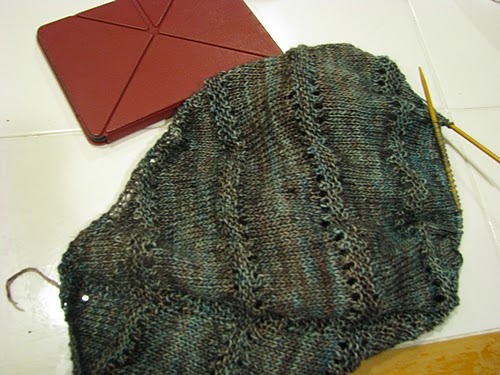 It was good to finish it; and I have picked back up the colorwork Drops cardigan I have been working on for nearly forever, and have made it halfway through the sleeves.  I am even toying with the idea of starting another big project, but I should make a decision on the ones that are hibernating first.

So today, since it is the first day of the Chinese New Year, and it is the Year of the Sheep (or the Ram or the Goat, pick your hoofed fleece-bearing animal), and I was born during the year of the Sheep <cough> years ago, seemed an appropriate time to feature some work in wool.  And to dust off the CarpeLanam blog, which I've been neglecting.  Sorry, blog!  It's not you, it's life in general. 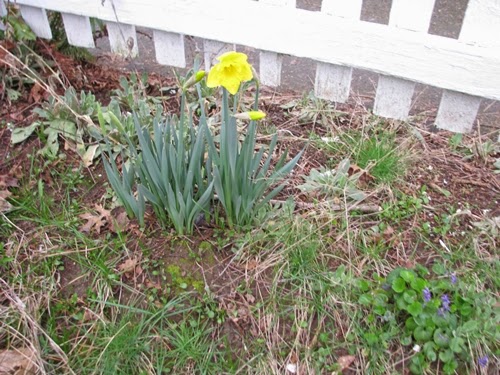 Randomday, with Tea and Introspection

Last Monday, Groundhog's Day, was the 11th anniversary of my Mom's death.  People deal with loss in different ways, and that is really all for the best.  I wrote a poem.  It's one of very few poems I've written in the last few decades, and it took almost no mental effort on my part.  It practically wrote itself, As such, it doesn't feel too self-promoting to say it seems to me like one of the best things I've written in forever.

Then there's my Dad, who hit the ski slopes.  Too hard.  We got the email Tuesday morning: a broken right elbow and surgery Tuesday afternoon to insert plates and screws.  This was distressing, no question... but there is something of a point of distinction in the fact that this injury was received in pursuit of a hobby he took up when he retired ten years ago.  And he was quick to point out, when I was able to speak to him, that the doctor said he was a "perfect patient."  I suppose there are worse scrapes a man of his age can get into.  But I will continue to worry about him until I am assured he has made it safely home from Tahoe.

Also on Tuesday, we were able to get Peter's car out of hock from having its thermostat repaired.  You see, the thermostat was broken so the engine overheated, and smoke started coming out of it and it was spitting coolant in the Fred Meyers parking lot, and it had to be towed from there to the shop.  For all of that, the cost to fix it was, if not affordable, better than it might have been.

On Wednesday I lost the battle I've been fighting for over three weeks to keep the dreaded virus at bay, and I also lost my voice.  It was probably a bit dramatic in 8th grade, reading the mythology story of Ceres and Proserpina, as my voice faded to a fraction of its usual volume.  Then home to meet the appliance repairman, who fixed the stove by replacing the entire top panel with the embedded controls for the touchpad that had shorted out.  It cost about as much as Peter's car repair.

I've been drinking a lot of tea for the last few days, as it seems to be the only thing that helps the sore throat and voice.  All in all, it's better than it might be. I'm still worried about it turning into something like the walking pneumonia that I had last year but I'm just uncomfortable.  The cough is not nearly so bad and with lots of tea, maybe it will stay that way.  I have drunk at least 10 mugs full today (mostly decaf).  I'm really not sure if all the elderberry cordial, and Zicam and Airborne and Cold-Calm and Cold-eze and vitamin C I took for the last 3 weeks did any good, or if more than one virus was involved.  No guarantees in life, but at least there's tea.

Well, the Great Muppet Caper has finished and the girls are heading to bed.  I have ironed enough things to erase some of the backlog, and I will declare this blog post done.  I think it was probably random enough.

Matter can be neither created nor destroyed,
But in an isolated system
Will be conserved in perfect balance,
Interplaying with its attendant energy,
According to the laws of nature and of nature’s God.

And in a universe of mysteries,
The greatest and rarest mystery of all,
That in a small quantity of collected atoms
From time to time
Matter and energy exist in equipoise,
The one supporting the other;
A hybrid
For a time, or a lifetime, or less
But at a great cost,
For there is no isolated system in this or any other universe.

The only matter that matters will
Inevitably
Be separated from its indwelling energy
And the energy departs
We do not know where
All that is left behind is matter,
And matter is the only thing that will mark the passing of energy --
A spark, a puff of wind, a moving shadow perhaps
The things we choose to mark its passing,
Bare matter themselves,
Wood, metal, stone,
A folded sweater, a dusty book,
Or random energy,
A dream, a memory,
Faulty firing of synapses
A sound, the soft click of a lid as it closes on a life
A flicker at the edge of thought
A strain of music—
All these things will last longer than the matter
That has been severed and cannot return to us,
Until we shall go to it.