Twenty-six years ago today, a lot of people ... the number was hotly and endlessly contested ... gathered on the Mall in Washington D.C. to "be counted" for life. I was there at the Rally for Life 1990. Here's the C-SPAN archived footage, in which I strongly doubt that I appear. I was backstage, wearing an apron, a red STAFF t-shirt, a walkie-talkie and as close to 80's hair as I ever got. I was on the team that planned it. Tent rentals, mugs, pins, bumper stickers, meetings with Secret Service, Park Police, FBI background checks, arrangements for VIP pickup and transport, hotel accommodations, 1st aid stations, portapotties, the press pen, audio hook-ups, table rentals. Jacki, bless her dear Arkansas heart, and her massive Rally notebook. No sleep in more than 24 hours. "Water. Water. Water. Water." "Tell the truth! Tell the truth!" and a stonewalling press corps. All of this, before the internet, and before readily available bottled water. It boggles the mind.

It remains a hugely formative event in my life. Here are my two most iconic memories from that frenzied time: I got to drive around the grounds of the Washington Monument, from station to station, in a golf cart, after dark. I cannot express how cool this was.

And I was frisked by Dan Quayle's Secret Service agents. See, I discovered that you don't want to be running anywhere close to a Secret Service agent and their protectee (who was onstage talking at the time, I think), even when you were told to escort the audio guy to the press enclosure fast because he needed to set up the link-up to the White House for President George H. W. Bush's address to the crowd, which was scheduled just as soon as Dan Quayle finished his speech. You don't want to be running, or even walking fast and looking nervous about getting your guy to his place on time, because if you are, the big guys with shades and earpieces will be all around you and even in your pockets before you know what is happening. Actually, it wasn't bad; I was just startled and they must have decided I was 115 pounds of not-threatening pretty fast. And the audio guy, whoever he was, got through too.

It was being part of such a complex, massive event as this that taught me not to be afraid of big, complex challenges, and that if you are patient and organized enough they aren't quite so daunting. But no one is rushing to plan another Rally. 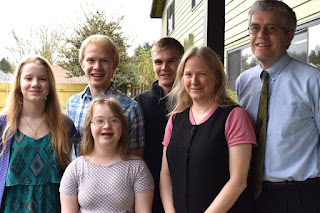 Life marches on, Randomdays come and go, and the blog has been neglected. This picture was taken on Palm Sunday, during the 12-hour window where both boys were home on Spring Break and we made it to church and Teresa kindly took our picture for the bulletin board before Peter had to head back.

These days, I find myself caught in a half-world between empty-nester and mother of teenage girls. I miss the boys terribly, but the teenagers at home remind me it's not such a great thing for kids to be in the nest all the time, and it's a good thing for them to grow up, and I hope they will. Daniel is barrelling full speed ahead toward college graduation; Peter is balancing college with plans for his military training, involving things like jumping out of helicopters. Tertia is in 10th grade in the local public high school special ed class, and Quarta is in 8th grade at Cedar Tree.

Added to this is the bizarre sensation of being a dinosaur, about to retire from teaching after 16 years. Other people ask what I will do. Because I'm not really old enough to retire, and apparently I don't look it either, so I guess I'll take that as a compliment. You have to remember I only got into teaching... kind of accidentally. Yes, that's it, the Accidental Classicist. Here's the short version: Y2K. I was homeschooling Daniel for kindergarten, Peter was making a monthly trip to the ER (that's another whole blog post), Tertia was an infant who required weekly therapy and a lot of specialist medical appointments, and we were new in town with no close friends. I burned out on homeschooling after only 6 months of that, and I knew Daniel was going to be the easy one of the three. And Cedar Tree was meeting as a homeschool co-op just down the street; in fact, we bought our house from the outgoing pastor of that church and one of the founding leaders of the school. So when we enrolled Daniel in the school, I knew I would have to work a few hours a week to qualify as part of the co-op. I listed my literature, writing, and French backgrounds, music, and the fact that I had studied Latin myself in high school. Sometimes I wish I hadn't. That was the only skill they were interested in at all. And here I am sixteen years later, well and truly typecast.

It's not such a bad thing. I love Latin. I genuinely like all the kids I teach, unfiltered as they are. Even the ones who write satiric tone-poems about how much they hate Latin and find me insufferably boring. But every time I start getting melancholy about leaving, something happens, vide supra, to affirm that I've stayed more than long enough. I wish there was a way to get graduate level credit for all the work I've done over these years. But I'm no longer an early-thirties mom with young kids to get through school. Life moves on. I'm hoping it's not too late to be a stay-at-home mom for a few more years.

Random things since my last blogging: we watched The Martian, The Peanuts Movie, Zootopia, Laura, and The Intern. I've joined Goodreads and am trying to figure out how not to have it flood my inbox with updates. I've been working on re-imagining the L-shaped brick garden bed, left over from the foundation of the old barn, as an herb garden. Some of the fennel, dill, and caraway seeds from my spice cabinet are sprouting. Cilantro and cumin too. I keep working on pulling up bindweed... it's like the Hydra. I've been trying to sort out the 4-5 kinds of mint in the mint bed and get them growing separate from each other. Apple mint is the one that grows the most vigorously and, of course, I like it the least. It's spider season inside; I keep the vacuum handy in the living room with the attachments to suck the spiders off the ceiling. It averages 4 a day. It's allergy season outside; April is the cruelest month. We had beautiful weather for several days, then the last few we've had heavy rains. Smudge didn't even show for his morning food yesterday; he was probably in one of his hiding spots. He was back last night and this morning, though. No sewing and very little knitting has been done. I have been spending a great deal of time worrying about the disintegration of American culture and the downfall of Western Civilization, and trying to find signs of hope in the current political situation.

Yesterday I found this lovely quote on Tatoeba:


Books are ships which pass through the vast sea of time. - Sir Francis Bacon

I traced it to what I think is its source, although it is a fragment of the whole sentence:
Literae celebrari debent, quae, tanquam naves sulcantes oceanum temporis.