Quiet: The Power of Introverts in a World that Can't Stop Talking, by Susan Cain is one of those books that I wish I had written.  Page for page, I can't remember the last time I nodded, gasped or exclaimed in agreement and recognition of a nonfiction author's observations; observations that seem so obvious and common sense, but I had never seen articulated before.  I've known I was an introvert for, well, forever, and I've also always intuitively known that fitting into the world was harder for me than for others.  Self-fulfilling prophecy? No, now I think it is the Extrovert Ideal of our culture working itself out.  How many times have I been told to get a thicker skin, not to take things personally, be tougher, more assertive... and how many more times than that I could, again intuitively, tell that someone was thinking that in my direction.  Here, finally, is some positive reinforcement for those of us who have to mentally arm ourselves for the sensory assault of going out into the world and come home exhausted every day; we are actually important to the smooth functioning of society, whether or not society sees it that way.  Just give us our personal space, respect our need for down-time to recharge the batteries, and whatever you do, don't put us in an open office plan and subject us to endless interruptions, multitasking and meetings.

Cain visits such extrovert-only environments as Harvard Business School, Tony Robbins seminars, and Rick Warren's Saddleback Church to explore the extent of modern America's culture of extroversion.  It wasn't always this way; in the early days of this country, much more emphasis was placed on character, and many presidents were introverted.  It's hard to imagine that happening now.

She explores the complementary relationship (albeit deeply strained) between FDR the extrovert and Eleanor the introvert, Eleanor serving as moral compass to Franklin's energy.  In the same way, Rosa Parks was the quiet strength behind the Civil Rights movement energetically led by Martin Luther King (whom Cain assumes to be extroverted, although I've read differing opinions on that).  The unique difficulties of relationships between sometimes conflicting personalities are explored briefly.  Then she goes into the science behind the differences in the brains of introverts and extroverts.  This is fascinating information, some of it very new neuroscience.  I suspect her spot on the political spectrum is further left than I'm used to, judging by her examples (Darwin, Gandhi, Al Gore(?)) and the evolutionary assumptions underlying her scientific explanations.  I still think learning about the neocortex and the amygdala is a valuable exercise.  So it's the "fight or flight reaction" I'm experiencing every weekday when I walk into the boisterous 8th grade class.  Good to know, I guess, and it explains why I feel compelled to advocate for the concerns of my introverted students, who are in danger of being overlooked.

I really appreciated the final chapter on education and introverted children, and I believe all teachers should read it.  Our current system is heavily weighted toward group activities, which favor extroverts and leave no time for the quiet individual practice (10,000 hours to achieve excellence) and deep thought needed to perfect a skill.  In addition, the pushiest of extroverts tend to take over a group, introverts shut down rather than participate, and are left feeling there is something wrong with them, when they make up anywhere from 1/3 to 1/2 of the population.  I also really liked her brief historical survey at the very end of the book; attitudes toward introversion and extroversion through the ages.  Jacob and Esau; the four "humors" (melancholy and phlegmatic being the introverted ones); Milton's Il Penseroso as opposed to L'Allegro.
Posted by Kathy at 1:00 PM No comments:

A true randomday; I just finished writing tomorrow's scheduled post, a book review.  I'm trying to wrap this up in less than ten minutes and head to bed.

Quarta has been working crew for the Cedar Tree Sherlock Holmes play that is now finished.  It has been a week of packed afternoons and some late evenings, but we went to the play yesterday evening and it was quite a treat.

I finished shampooing the living room carpet this morning, and was pleased to note that the carpet cleaner machine has stopped kicking out clouds of dust and started functioning more or less as it is supposed to.  I wonder if it had something to do with the broken piece of plastic that I removed from the belt access compartment.  I'm counting it a success, since it's at least 11 years old.

Shampooing the carpet in one room makes me realize the vast scope of the task of spring cleaning the whole house, which I don't think I will even try. Maybe I can tackle the family room next year.

This week I made an impulse purchase at Costco: I bought a stainless steel compost bucket, to replace the plastic gallon ice cream bucket that has been collecting kitchen scraps on the kitchen counter.  It is so much more elegant looking.

Steve found a snail this afternoon while gardening and Quarta adopted it and put it in an terrarium made of a salad greens container.  I think she's calling it Shellburt.

At least one of the reasons I haven't been blogging as much is because I have been obsessed with Duolingo for the last year or more.  Now, in addition to having completed the "trees" in Italian, French, Spanish, and German, and working on Dutch, Portuguese and Swedish, I have decided to try posting Latin lessons in the discussion forum, since there is a steady stream of people regretting that there is no Latin course available there.  Here's the directory I made for the course so far.  I'm kind of proud of it, but only time will tell whether I can keep up with it in the style of Duolingo.

And that's it, I'm going to call off random blogging and head in the direction of bed.
Posted by Kathy at 10:22 PM No comments:

Spring Break has come and gone, and I haven't blogged much.  Here are some pictures to catch you up. 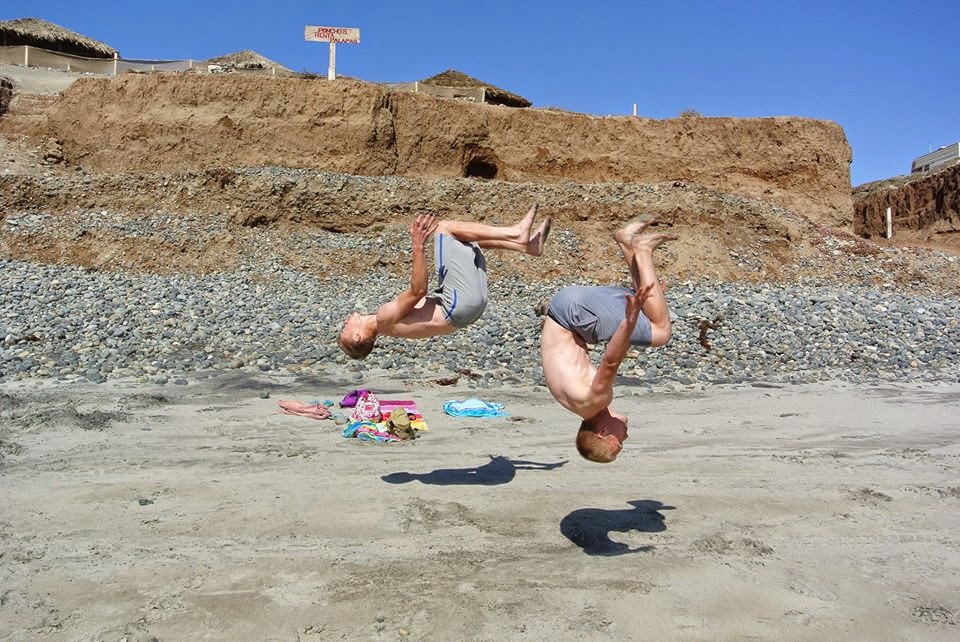 Peter joined a Cedar Tree work group in Baja, Mexico, building a home for a deserving family and taking time occasionally to entertain the observers. 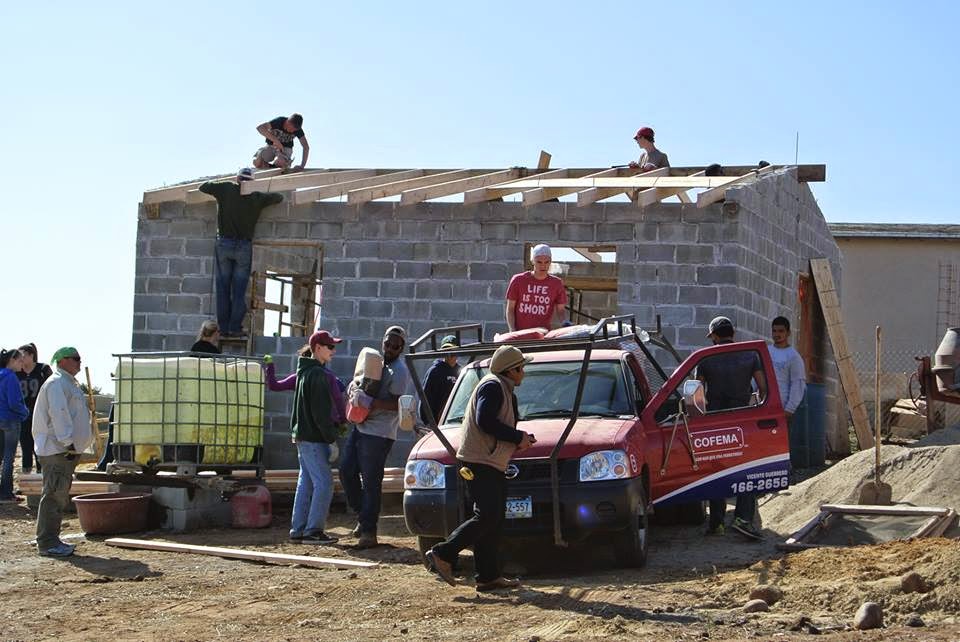 It's the second time he's been part of this trip, and it's great for him to have such a meaningful life experience. 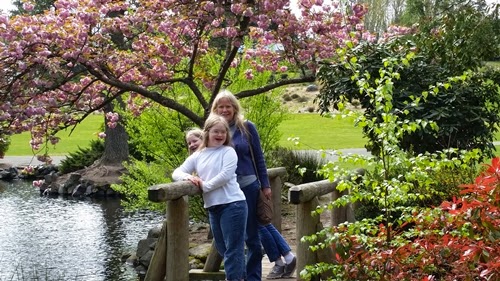 Meanwhile, Steve, the girls and I went on a 2-day trip to Tacoma.  It was very pretty, as you can see.  We visited Fort Nisqually, which is a lot like a more compact version of our Fort Vancouver, and the Point Defiance Park zoo and aquarium. 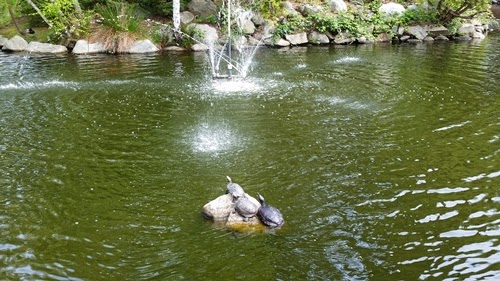 Turtles sunning themselves at the fountain in the park. 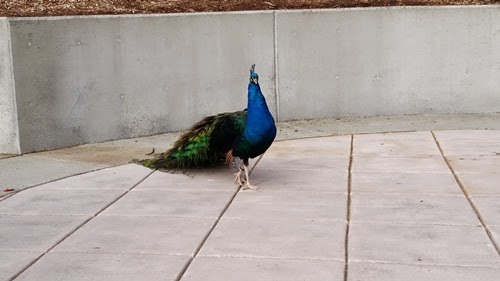 A peacock obligingly showing off at the zoo.  We don't have pictures of the Museum of Glass, where we sat transfixed for nearly two hours watching the creation of a sculpture, start to finish. 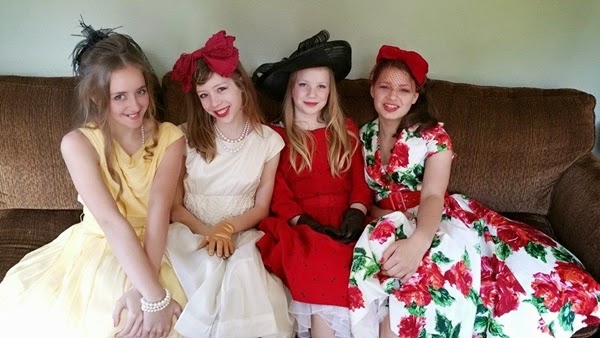 When we returned, Quarta took part in a really cool birthday party for a friend of hers.  The girls dressed up in vintage clothing and had their pictures taken at various venues across town; Costco, 7-11, a diner, a cafe, and various living rooms of friends.  Peter returned from Mexico and we went right back into school this last week.  Maybe not quite as refreshed as we might have wished.

Now as we hurtle toward the end of the school year, Peter has to wrap up his Senior year and keep up with his National Guard duties (he is away at drill this weekend); Daniel is wrapping up his Junior year at college and writing impossibly long and complicated papers and applications for internships; Tertia is busy with school, choir and friends; Quarta is working crew for the Sherlock Holmes play the school is putting on this week.  I'm muddling along as best I can with Latin and the usual classes, and I'm half-heartedly thinking about cleaning the rest of the carpets I started shampooing over break.  The clean sections make the rest look worse.

Since I haven't blogged in so long, I have a backlog of random thoughts and observations that are in danger of being lost to the world forever (not that it would be a huge loss or anything).  I need to get back in the habit with at least a book review soon.