I was inside Target three times in less than 2 hours today.  I went in a little before 10:00 to get Primigenitus' senior picture order started, but the photo shop was not open.  So we walked over to Famous Footwear, but it was still closed.  So Secundus joined Quarta and me and we walked back to Target, looked for shoes, found some for Secundus but none for Quarta, and by that time the photo shop was open.  Then it was back to Famous Footwear where she did find shoes, then to the van, dropped Secundus off at home with his loot (2 shirts besides the shoes), drove back to the shopping plaza.  Then we went into Kohls to use my Kohls Cash, which I had from two weeks ago on the day of the Cedar Tree auction, when Steve and I realized his suit jacket had ripped 2 months ago, and he needed a suit that day.  Earlier this week, I had tossed out my 3-year-old crock pot, which had developed a short so that, to get it to heat up, you had to hold your finger down on the button constantly for about 5 minutes before it would override the short.  I gave up on it earlier this week and tossed the whole thing in the trash... but my 20-year-old crockpot is just not big enough or versatile enough for anything other than back-up use.  I picked out a Food Network slow cooker that was listed at $70, on sale for 40, and used my Kohls Cash to bring down the price to a whopping $11.37.  Score!  Then it was back to Target to pick up the photos and finally home. 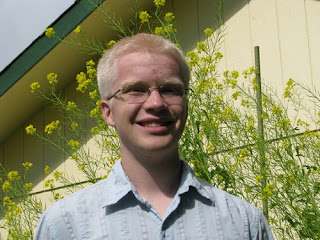 My handsome, tech-proficient son.  And I actually didn't do such a bad job with the photo shoot myself.
Posted by Kathy at 9:54 PM