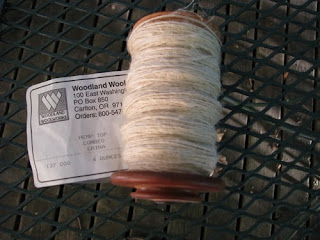 Today is the first day of the Tour de Fleece, the spinning companion to the Tour de France.  I went all out last year and spun a sweater's worth of orange superwash, but this year I don't have any big challenges for myself.  But I will be spinning a bit, after several months of ignoring my wheel.  This is a bobbin of hemp.  I bought the top a few years ago when Woodland Woolworks was closing.  Hemp is easier to spin than flax, and it doesn't have that hay-like smell that flax does.  I'm thinking it might make some nice little knitted hand towels or dishcloths, or a market bag.

I should really look up some race coverage of the Tour de France while the spinning is going on.

21 Jokes Only Nerds Will Understand.  I found many of these hilariously funny.  There were a few I didn't get, so I guess I'm not a total nerd.  I especially like the one about the Roman who walked into a bar and asked for a martinus.  "Don't you mean a martini?" says the bartender.  And the Roman says, "If I'd wanted a double, I would have said so!"

More proof that I'm not a true nerd: I'm not sure what will happen when Google Reader goes away on July 1, and I don't really care at this point.  Maybe I will on Monday.  I think that the Blogger dashboard, where I read my blogs, is different than Google Reader.  But I'm not sure.

It has been hot here the last few days, but not nearly so hot as in other places in the country.  More humidity than we usually have as well, but again, nothing compared to other places I've lived.  It's so nice that at night there is a cool breeze blowing.  Unfortunately, it's that time of year when the neighbors let off lots of fireworks, so I won't be able to sleep until they do.

We celebrated Daniel's birthday today with a big cookout and Triple-layer Strawberry Cake.  I'm a little tired of cooking, but we have lots of leftovers in the fridge and a few things that don't fit in the fridge.  That will resolve itself with one or two teenage midnight snacks.


I believe that all wisdom consists in caring immensely for a few right things and not caring a straw about the rest.  -- John Buchan