Every year, Cedar Tree has a Latin Emperor's contest for grades 3-6.  It's elimination, in the style of a spelling bee.  We toga 4 emperors, one for each grade, and all elementary grade students watch with great interest and partake in the Roman Feast at lunchtime.  I forgot to take my camera this morning so I have no shots of my 6th graders competing (it was a good contest, I had to come up with extra words and sentences than I had planned).  But I did document the preparation of what I believe are relatively authentic treats yesterday, treats which were consumed by students while reclining on the quad on a glorious early June day.

I have made Roman Honey Cakes before, and I decided to try for a little more authenticity this year.  There were 15 eggs, whipped in my stand mixer until they were thickened.  Then I drizzled in about 1 1/2 cups honey and was about to add 1 1/2 cups of all-purpose flour when I stopped, and realized that I should probably use spelt instead, since it's more typical of the grain the ancients would have used. 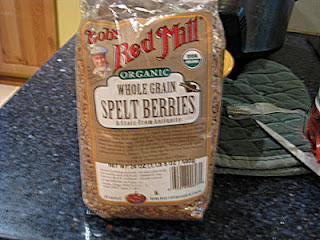 I do not have an authentic quern, so I used the completely modern K-tec kitchen mill.  I don't have a staff of kitchen slaves, so this is the next best thing: 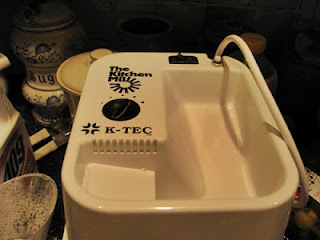 It makes a lot of noise, but it does make a nicely ground flour.  I added it to the eggy batter and then I selected some spices: 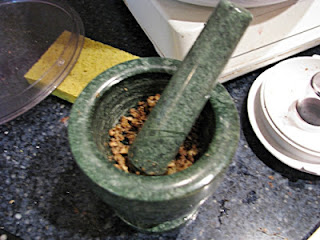 I do have a relatively authentic mortar and pestle.  Doesn't everybody?  Seriously, I use mine a fair amount even when I'm not trying to be authentically Roman.  Although I did try to get the coriander down to a finer grind with the blender, but that didn't work all that well for such a small amount.  Coriander, cardamom, cinnamon, and a fairly large knob of fresh ginger. 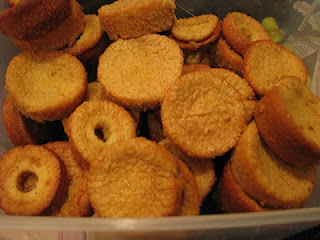 I baked them at 350 for about 20 minutes, using muffin tins and nonstick mini-donut pans.  It's best to grease the tins well, and don't expect a light, airy cupcake texture.  These are like a cross between a sponge cake and a muffin.  They are nice to munch on.  I don't know how terribly realistic it would be for the ancient Romans to be able to beat eggs to the degree that a modern stand mixer can do though.

If you're going for authentic Roman food, you really need to check out the Pass the Garum blog, where I got the following recipe for Dulciaria (pepper and pine-nut stuffed honeyed dates).  It's quite delish. 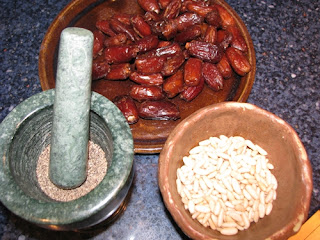 Yes, I used my mortar and pestle twice in one day!  This time, it was to grind pepper the old fashioned way.  I mixed that with pine nuts (which are $26 a pound, so I only bought a small amount).  Then I stuffed the peppery pine nuts into the pitted dates. 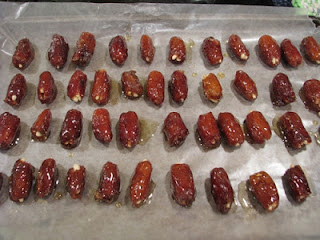 Add a dusting of salt to the sticky dates, then make them even stickier by coating them with hot honey (about 1/4 cup simmered in a small saucepan; use a skewer to dip and a small fork to push the date off the skewer after dipping).  They were extremely sticky after sitting in the fridge all night.  The pine nuts have a slight vanilla flavor - I had never noticed that before, probably because they cost $26 a pound and I don't buy them.  The salt and pepper give a nice, grown-up flavor to this authentic Roman treat. 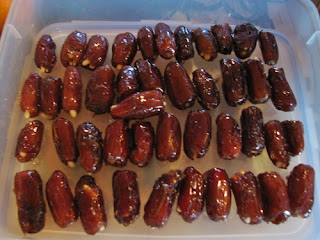 If I still taught on the Rez, I'd go pick up pounds of the pine nuts and send them to you free! Shelling would be up to you, though. LOL. My 6th graders used to drive me crazy eating these all the time. You can't stop it, so it's just as well to join in. I had rules about dropping shells on the floor, but they just eat most of those, too!