I had to cook dinner the other night, which is nothing new.  I usually have to cook dinner.  It's just harder when one family member has braces and doesn't want to eat anything crunchy, one has recently become a vegetarian, and two of them rotate around whether they will eat vegetables or not.  And two of them have probably depleted the fridge of the ingredients that I was counting on.  My sympathy levels are not great for the ones who are old enough to fend for themselves, and they are all over 10 so are theoretically able to help at least a little.  Anyway, that's the dinner situation at our house lately.  Coming up tonight, I think I'm going to cash in my gift card for Papa Murphy's, and make Quarta make a fruit salad.

We had a bunch of lovage from our Grace's Garden share.  Lovage looks like a cross between celery and parsley; it's got larger leaves than parsley, and it doesn't have thick stalks like celery; its flavor is a little like celery but much, much stronger.  So strong that after nibbling a leaf, I decided it would need to be cooked, not used in salads.  It has a little of that "if I eat too much of this it will give me a headache" taste, if that makes any sense.  I also remembered reading something about lovage at my new favorite Ancient Roman food blog, Pass the Garum.  So I went there and did a search.  Apparently the Ancient Romans loved lovage, especially the seed, and used it frequently.  I found two recipes that call for lovage seed, not the green herb, and I decided to freely adapt them for Tuesday night dinner. 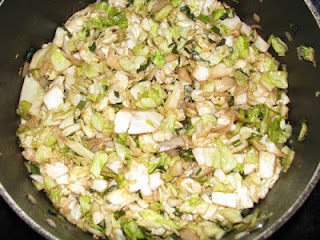 I may be very deferential to the ancients when I teach Latin, but I'm not going to give up my modern cooking equipment, techniques, and certain prejudices -- like you don't boil cabbage.   You just don't.  So I decided to sauté my 1/3 of a chopped cabbage in a little olive oil, along with chopped onion, ground pepper, and chopped lovage.  It gave off a mysterious, dusky, old-world kind of smell when the lovage was added.  Once the vegetables were crisp-tender, I added a teaspoon of Thai fish sauce (the nearest equivalent to liquamen).  And because I don't have any raisin wine handy, I put in a few tablespoons of honey and a splash of balsamic vinegar.  It was a very nice way to prepare cabbage, and you tasted the exotic flavor of the lovage without it being overpowering.  Just don't expect cabbage to cure all diseases. 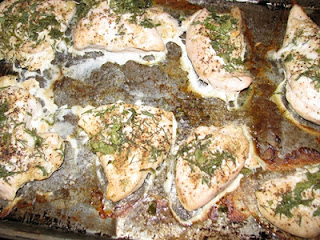 You can tell that I do not pride myself on my food photography, and that I can't really follow a recipe at all.  I still want to try the real Parthian Chicken recipe, but on a weeknight when I was tired to begin with, this was quite successful.  Except with Secundus, the vegetarian.  I had chicken breasts defrosted and ready to bake; I just decided to use some Roman-esque seasonings on them at the last minute.  I drizzled them with olive oil, then the juice of half a lime, then chopped garlic and fennel and lovage and a little cilantro, plenty of pepper, and finally some caraway seed, ground in my mortar and pestle.  Bake at 350 until it's done, and it's good.  Better than the picture.

So there you go - two Roman-inspired dishes featuring lovage, prepared in an American kitchen by a tired mom.  Enjoy!

I love your Roman cooking, though it involves things I never cook, and sometimes never heard of. =)