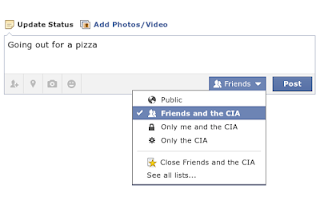 Maybe you've seen this funny going around Facebook.  Shocker: anything you say on the internet is in the public record, and can be retrieved somehow, somewhere, by someone geeky enough to do so.  Should it worry you?  I guess that might depend on what you do online.

Speaking for myself, I know I have an FBI file; I'm sure it's been updated since 1990 at least once, and it's probably pretty boring, although my pro-life ties might be enough to get me targeted by the IRS in the current political climate, if I weren't such small potatoes.  I think it comes as a bit of a rude shock to the next generation, though, that big brother is watching quite to that extent; but it's nothing new.  Personally, I'm not paranoid enough to be that disturbed by the phone records and the data mining on the internet.  There are plenty of psycho stalkers and cyberbullies out there who wish our nation harm; a vigorous national defense pretty much requires that we stay a few steps ahead of them, and that means government agencies will have access to these kinds of powerful tools.  In theory, no government has the resources to conduct systemic persecution of its political enemies.  That doesn't mean the government won't try.

It does raise the worrisome age-old question: Who will guard the guards themselves?  (It should be noted that Juvenal raised this question in a quite different context: political corruption and bribery were systemic in Roman government: the concept that government, whether emperor or senate, should not have absolute control would have seemed bizarre to him.  We are actually very fortunate to have the degree of freedom we do).  How can we trust our government to use this data wisely, given that the data is out there whether we like it or not?  Well, we can't.  We have checks and balances to slow government down and keep the power from swinging too much one way or another, but government is made up of corruptible people.  Some of them will figure out ways to abuse the system for political ends.  We'd better hope there are enough trustworthy people involved in government to hold them accountable.  Ordinary Americans ignoring the danger signs will not help matters.

In all honesty, I'm glad the current crop of scandals is focusing the light on this latest governmental overreach.  The best defense?  Transparency.  A free press was invented for just such a situation as this, if the government itself is unwilling to be forthcoming.  And a healthy dose of  satire.  I mean, if there is a danger that the sacred privacy of the American freethinkers is being infringed, let's invite the CIA to play Farmville, or figure out how to unfriend them.  A better use of our national resources, though, would be to radically reduce big government spending and the overreach of such agencies as the IRS.  And to demand accountability from the governmental leaders who ordered the overreach in the first place.