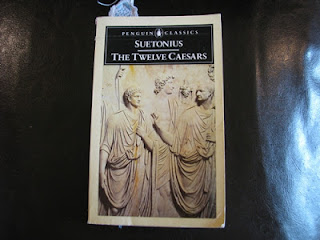 It's a good summer to be reading Suetonius.  Disturbing, but reassuring in a way, to realize that the cultural disintegration we are experiencing here and now is nothing new.  American exceptionalism - maybe not so much.  We have made a wilderness, and we call it progress.

I read Tacitus several years ago, and appreciated his restrained yet biting style.  I'm sorry that many of the juicy parts were lost to history.  But although both of my sons have read Suetonius as part of their classical education, I had developed my 6th grade Roman history unit without it.  So in late spring I set out to remedy the situation.  In a sense, I have learned nothing that I didn't know already, and only filled out what I already knew from secondary sources with material which is almost entirely inappropriate for 6th grade.  You might want to grab your copy of Suetonius soon, before the cultural police decide he was too judgmental and bigoted to remain on the shelves.  We already know how they feel about the Bible and those who teach from it.

Suetonius is a bit more prone to repeat hearsay than Tacitus.  And it is a bit disconcerting for a modern reader who wants to see a psychological analysis of the depravity of the Caesars, some kind of explanation for their behavior - and it is not forthcoming.  But in matters of historic record he is careful to present a balanced and fair account, with not much personal feeling coloring his writing.  The ancient Romans were, as a whole, very tolerant of anything or anyone that could conceivably be of use to them.  This open-mindedness served them well as they were building their empire.  In fact, their great irony was that they were so tolerant, even of immorality, that they became intolerant of those who adhered to any basic morality.  And when absolute power was concentrated in one emperor (who expected to be treated as a god), the new intolerance could be directed toward quite unexpected victims.

In the world's way of looking at things, both Julius and Augustus Caesar were brilliant leaders, and they were both duly deified after their deaths.  Yet the arrogance and narcissism that became pathological in their successors was present in them as well.  Strangest to modern readers is the obsessive-compulsive way they arranged their own and their families' personal lives - even to the point of arranging divorces and remarriages, frequently against the consent of the parties involved.  Check out the family tree of the Julio-Claudian emperors for just a taste of the weirdness, but prepare for a confusing time.  Ironically, with all the attention Augustus gave to micromanaging his family, he was remarkably shortsighted when it came to preparing a successor.

Think Paula Deen got a raw deal?  The emperor Tiberius was so sensitive to imaginary insults that he banished a Greek leader, Xeno, for speaking a dialect that reminded him of an unhappy time in his life.  He forced Seleucus, a scholar, to commit suicide because he was too well-informed about the literature Tiberius was reading.  Of course, Tiberius was perverted as well as being cruel and, hmm, maybe you could say "capricious" if you wanted to make a bad pun.  So many Romans were killed without cause during his reign that no one thought of deifying him when he finally died.

Caligula - even Suetonius calls him a monster.  Probably the less said about him, the better.  His attempts to define as normal whatever he wanted to do were not accepted by the people, and were ultimately not successful.  There is no denying that human life was not valued highly in ancient times, and that common decency was hard to come by.  But then you read a story like this one and wonder whether we should really feel superior at all.  Or when a shrieking mob of activists is so devoted to the killing of late-term babies that they shout down a Texas bill preventing abortion when a child is capable of feeling pain.

I always felt sorry for emperor Claudius.  Awkward and weak, he was despised by his own family members and was never expected to amount to anything - so he wasn't prepared to be a leader.  It's hardly surprising that he was not a capable leader, and that his great weakness of falling for inappropriate women led to his downfall.

The first recorded account of gay marriage was by the emperor Nero.  Oddly enough, this is not something that makes it into the current press coverage, but I'll quote from Suetonius, p. 228, right after Nero raped the Vestal Virgin Rubria:

"Having tried to turn the boy Sporus into a girl by castration, he went through a wedding ceremony with him -- dowry, bridal veil and all -- took him to his palace with a great crowd in attendance, and treated him as a wife.  A rather amusing joke is still going the rounds: the world would have been a happier place had Nero's father Domitius married that sort of wife."

There follows a paragraph describing Nero's most likely incestuous relationship with his mother Agrippina, and then another gay wedding, this time with Nero playing the bride.  So much for the "committed, loving" relationships we keep hearing about as the gay agenda is imposed on modern America: the second time was with Doryphorus, not Sporus.  It would have been amusing, if it had not been accompanied by so much wanton cruelty.  Nero was responsible for killing an obscene number of human beings who crossed him, including most of his family members.  The word "unnatural" does come to mind.  One can only imagine what might have happened to the poor florist who refused to provide flowers for his gay wedding.

I wonder, will future generations look with the same freak-show amusement at modern America that we have when we read about the decadence of the Ancient Romans?  Bottom line, what I get from Suetonius is, the ancient decadent Roman emperors practiced perversity and the cruel slaughter of innocent people, but even the pagan historians still viewed their behavior as unnatural and depraved.  Human cultures do not turn around on a dime (or a sestertius), and trying to force people to accept what they know at a very deep level to be wrong will not be successful.
Posted by Kathy at 7:33 PM

So, I went over and ordered it. I think there may be parts I skip, as being too salacious for my taste, but I bought it with reward points, so I won't lose much if I hate it. =) It sounds interesting. I appreciate your parallels to our present time. I've thought that a time or two myself.

I think you will enjoy it...a very good reminder that there is nothing new under the sun. Even the salacious parts are no worse than the things we see or hear about in the popular culture every day. In fact, the translator Robert Graves used the material as the basis of his "I, Claudius" book which was later turned into a miniseries. Think of it as a true-life 2000 year old soap opera.