Our family is always pretty busy, but this last week takes its place in the Chapman Book of World Records as the week that I'll look back on as the benchmark of craziness.  "Remember that week with the 2 graduations, 2 graduation parties, a play, a concert, puberty, a Senior trip to Washington D.C., a work conference in Maine, a migraine from hell, a refinance, Field Day, and teacher inservice?"  I probably won't, because I'll be blocking it out the same way you block out other traumatic events.  So in the interest of jogging my memory with only positive triggers, here are some of the pictures from Field Day.  Only a week late!  (If you're looking for quilts, check out my Jack's Chain tutorial from a few days ago). 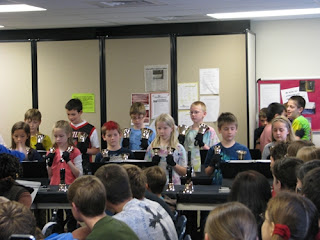 Quarta with the 4th grade handbell choir during the Field Day talent show. 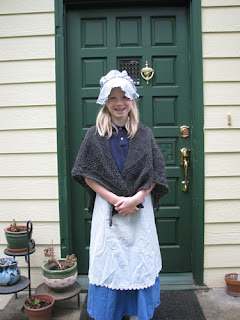 This was a few days before Field Day, but here is Quarta's costume for history day.  She represented a colonial lady of Boston and described the Boston Tea Party with words and edibles. 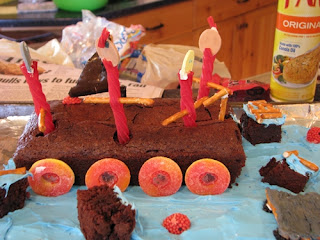 My contribution was figuring out how to attach the Necco wafers heads to the Twizzlers bodies by cutting a slit in the Twizzlers... better than frosting! 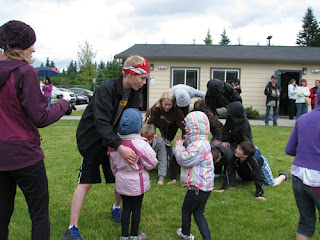 One of the best improvements ever in Field Day was getting the Rhetoric students, not the teachers, to captain the teams.  Here's Secundus organizing his pyramid.  He does a great job with the little kids!  And yes, it was chilly on June 8 in Ridgefield, WA.  I don't think it ever hit 60. 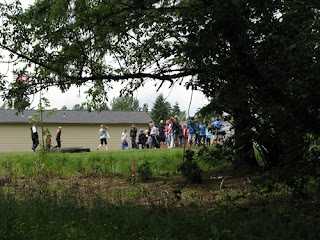 Field Day looks a little different seen from a distance through the woods. 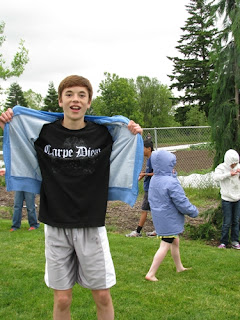 Fabricius has a cool shirt! 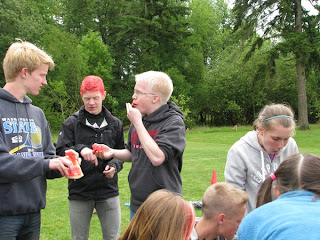 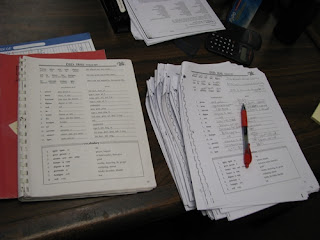 All in all, I think I prefer grading the 18-page Dies Irae.  I spend part of every Field day finishing that bit of grading; it's very appropriate. 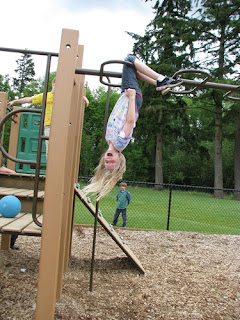 That's Quarta upside down on the play structure.  There were scattered showers throughout the morning. 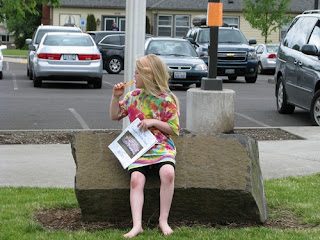 It was really too cold to sit on the rock eating a popsicle and reading the yearbook, but that didn't stop kids from trying. 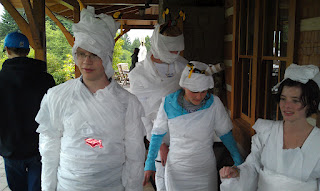 Afterwards the Rhetoric students went up-county to the Leutholds' farm, and the parents of the seniors joined them for a barbecue.  Primigenitus won honors in the toilet paper cap and gown contest. 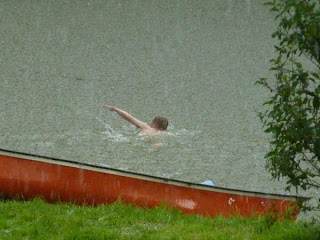 Secundus took a dare to go swimming in a hailstorm. 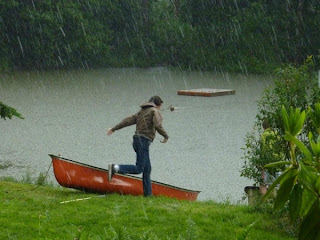 This was probably not one of his brighter moments.  You really can cramp up from hypothermia and shock, and your friends would feel really bad if that was the last thing you ever did.  Fortunately he floated on his back until he got close to land, and then spent the rest of the afternoon warming up. 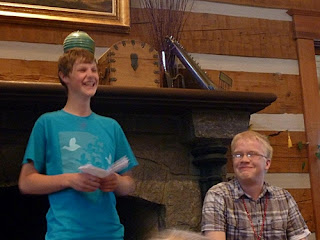 The seniors were subjects of some good-natured roasting.

We left early to attend another graduation, and then the Seniors and Juniors left very early Saturday morning for the D.C. trip; I dropped off Primigenitus and Steve at the airport at the same time; Steve's AASHTO conference was in Portland, Maine this year.

It has been a week since the events in these photos, and I am just beginning to recover.
Posted by Kathy at 4:54 PM