Randomday: Keeping Out the Damp 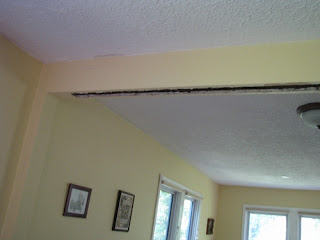 Some days are more random than others. 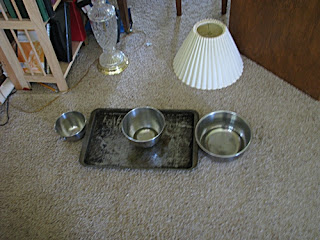 Our downstairs ceiling is leaking. 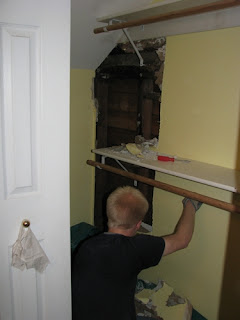 That means it's coming in from the upstairs.  This is the closet of the girls' room.  It smells really bad in there right now. 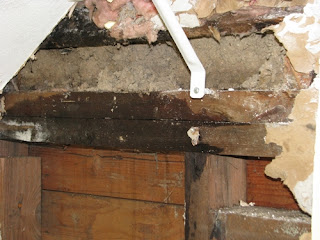 It's running all the way down the joist onto the living room beam and then wicking all the way across the beam.  Probably has been doing this for several months now.  We cannot afford a new roof at this time, but Handyman Can is on the job.  Let's hope we can get the repair made next week and it's relatively simple.  And that it stops raining!

The Shakespeare Love mug Primigenitus bought me at the Folger Shakespeare Library came with a link to an instructional video.

I keep checking to see how seven kittens in Pittsburgh are doing.

Star Trek had much better writing after Gene Roddenberry departed.

Thai Little Home is a really neat Thai restaurant that I hadn't been to until yesterday.  They advertise the biggest Pad Thai in town, enough to feed 4.  We might have to go back there with the family.

Also, it is really difficult to get Steve to buy shoes.  He looks, but nothing is just right.  He liked the bit in Mr. Magorian where he found the perfect shoes and bought a lifetime supply... and when the last pair wore out, it was time to go.  So far I have found out that he likes New Balance 10.5 regulars for sneakers, but they can't be in any funky colors.  And he likes Ecco for dress shoes, but when we go where they sell them, he doesn't find anything to buy.  And that he doesn't like Rockport.  And I'm not clear about Dockers and the other brand he tried on last night.

I had insomnia last night, worrying about the leaky roof, and went downstairs to listen to the drips and watch posts going live on Ravelry.  It's fascinating the list of countries I came up with: if you're in the UK you get to choose whether the UK, Scottish, English, or Welsh flag comes up on your profile.  Besides that, there were Australia, South Africa, Ireland, Norway, Finland, Estonia, Greece, Spain, France, Germany, Bulgaria, Singapore, India, Denmark, Netherlands, Belgium, Austria, Hungary and earlybirds on the east coast of the U.S. and Canada.  Which brings to mind the international nature of Ravelry, and just why it is so annoying to be harassed by the U.S. Olympic Committee over the name "Ravelympics."  I've been joining in on the discussion about what to call it if they have to change the name, and suggested a move to Mt. Parnassus.  And the suggestion for the slogan "faster, bigger, prettier" was made, for which I came up with the translation "Citius, Magius, Pulchrius."  But frankly, I'm looking forward to the Tour de Fleece a little more.  And that's coming up next week, right after Primigenitus' 18th birthday.

I wonder if it will stop raining by then so I can spin outside?