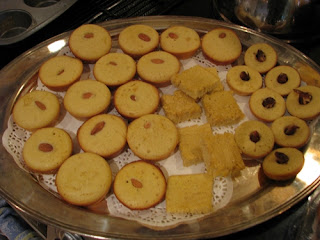 Here are the Roman Honey Cakes I made for Emperor's Day today.  12 eggs, beaten in a stand mixer until thick, then honey (about 1 cup) drizzled in, then about 2 1/4 cups flour and some coriander.  Baked in a 350 oven for about 20 minutes.  The muffin-shaped ones have almonds on them, the square ones are plain, and the mini donut shaped ones are stuffed with dates.  They are now gone. 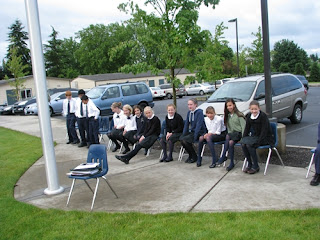 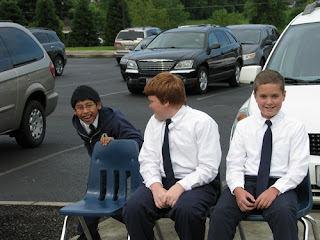 I teach some of the goofiest kids on the planet. 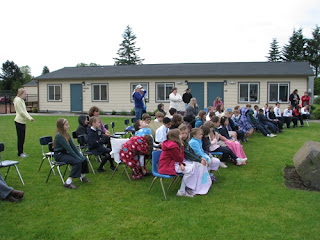 The assembled throngs of onlookers.  I provided togas for the coronation of 2 of the 4 emperors but was unable to take a picture because of scheduling issues.  Sniff. 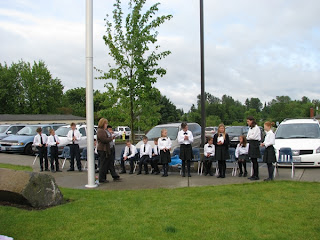 Kathy H. has been working hard with the 5th-graders on verb forms.  They could probably beat my 8th graders at 4 principal parts.
I missed Randomday on Saturday.  I have quite a bit of random stuff saved up though, so I'm declaring belated Randomday today.

My son was in the newspaper today.  Next to the obituaries, because I think they left him out when they were doing valedictorian pictures of all the big schools yesterday.  (Kind of like that episode of the Middle where poor Sue Heck was listed in the yearbook under "in memoriam."  My life is so much like an episode of The Middle, it depresses me to watch the show). But the online version is quite nice.  And I actually took that picture of him.

I watched every televised minute of the Spelling Bee over the weekend, and wrote down all the words, because I am a total Spelling Bee geek.  Here they are:

Steve is watching coverage of the Queen's diamond jubilee taped from BBC.  Yesterday it was the boat parade on the Thames.  Cool stuff.