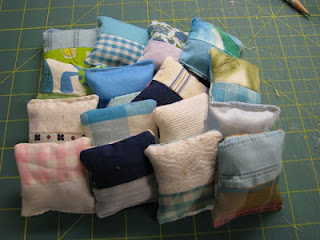 I've made a lot of lavender sachets lately.  It started with realizing that the lavender outside is getting to the point where I could harvest it, and I still had more than a gallon of dried lavender from previous years.  And so I took the blue, pink and green scraps that seemed appropriate from Grandma and made some quickie sachets. 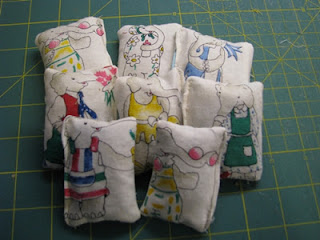 Grandma also had some little elephant rectangles in her scrap bags, so I used them. 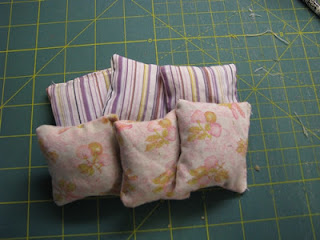 I had a few vintage scraps of my own to use.  Just a few!  You don't need a tutorial for these, but here's the basic procedure: cut squares about 3", stich with a 1/4" seam around all 4 corners but leaving an opening of 1" or so; turn right-side out and use a wooden iron or other tool to poke the corners out; spoon dried lavender flowers into the bag, and topstitch the opening closed with a neutral thread, backtacking to secure.  It's very soothing to make something repetitive like this that requires next to no thought. 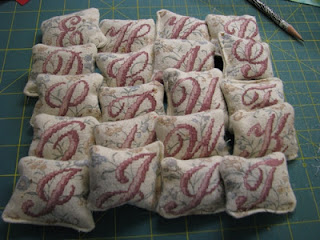 And my old alphabet skirt got cut up and I now have just about every letter of the alphabet.  These were a little smaller than 3" and so were a little harder to stuff.  And I need help with the letters in the bottom row... I, J, S, T? 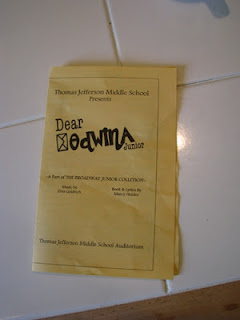 Last night I took the girls to see the play, "Dear Edwina, Jr." that Tertia was almost in, but then after she started bowling she couldn't be in.  It was cute.  "If you need advice in Paw Paw, Michigan..."  Then we came home and watched the semifinals of the Spelling Bee.  It doesn't get much more Americana than that.  I really hate how they changed the rules this year though, especially when there were a handful of kids who made it through all the rounds of the semifinals but were eliminated based on scores on the written test.  And they did this on national television.  Now, I'm not a big proponent of the self-esteem trumps all philosophy, and I understand it's a competition and you have to realize that only one person can win, but I have taught middle school for 13 years.  And it's just cruel to do that to middle schoolers.

Speaking of things that are cruel to do to middle schoolers... mine are taking their 4-5 page Latin final exams today.  I will be grading for the next eon or so and blogging will have to happen when it happens.  Enjoy the virtual scent of lavender in the meantime.
Posted by Kathy at 9:44 AM

I agree with your letter analysis. Those are adorable sachets. I should plant some lavender, if I find it grows in TN. I also agree with your analysis of the written test on national television. If it's a spelling bee, I don't think there should be a written test. Who cares if it takes a long time to get to the last one? If the sponsors are that concerned, then only show portions up to the last ten contestants or something. I don't like that change at all! Then to out their scores on national TV seems a bit harsh, too.