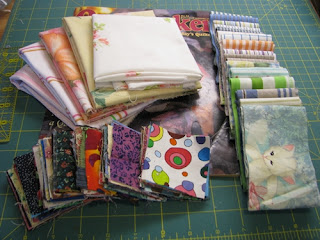 Well, a big congratulations to Needle and Nest, who won my giveaway hosted by Sew Mama Sew this week.  Looking around her blog, I'm glad she won -- this is someone who knows how to appreciate scraps!  Whenever I had time this week I cut 2.5" squares and strips; some were from recent donations by my mother-in-law, and some were from my own healthy collection of scraps and vintage fabric. I saved some for my own future quilts and am happy to pass along these, along with a 1997 issue of Quiltmaker magazine and a little lavender sachet.

I had a blast reading all the comments submitted in response to my request for memories of Latin.  They ranged all over - some people wished they had taken it, some loved it and shared fond memories of their eccentric Latin teachers (what's up with all Latin teachers being eccentric anyway?  Oh well, guilty as charged), some struggled when they had it but were glad afterwards, some have only faint memories of childhood Mass in Latin, several had it but couldn't remember anything.  Commenter 101 said:

I can sing 'Oh where, Oh where has my little dog gone' in Latin. You know, for emergencies.

Oh, boy, this is the giveaway for me. I took Latin for all 4 years of high school. My Latin 4 class consisted of only me! Unfortunately, I have forgotten much of what I learned, but I remember the Latin "insults", like Tacete caudex, caprimulgus & rurus. I also committed to memory the Latin dialogue from Braveheart, "Homo endomitus est et sepidicet mendacio. Ego nunquam pronunciare mendacio, sed ego sum homo endomitus." Vini, Vidi, Vici. Alia iacta est. Oh, I could go on and on. Thanks for the giveaway!

I was JUST thinking about Latin this morning, I kid you not. I took 3 years of Latin in highschool, belonged to the Latin club (sigh) and I still use my knowledge to figure out words I don't know the meaning of right away. Oddly enough, random congegations go through my mind also...maybe I shouldn't have admitted that :) thank you!

And commenter 139, just to keep me humble (apparently many of my students agree with this):

Ohh Latin yeah what a wonderful way to torture children ... sorry I guess the expereince isn't far enough in the past that I have forgotten all the studying and turned it into an idealistic "no better place then highschool" experience ...

I like the way you roll, Kathy - are we related? My best memories of HS were Latin. Learning carols in Latin and singing them in the school halls. A young card of a classmate who first told me [from the seat behind me in class] that my eyes were like limpid pools of toilet water... which of course is what any brown-eyed girl wants to hear, but he was being silly not rude. We had a lot of fun in that class, and I learned more about Enlish in there than I ever did in English class. I went on to take two more semesters of Latin in college, for fun. It wasn't nearly as much fun though - everybody was too serious. And it's not easy to find classic authors who specialized in wit and humor.

That's why we teach it in middle school!  And we try to have fun with it.  Some weeks are better than others, but that's true of most things.

Anyway, I now have a mostly cleaned up workspace and am working on piecing string blocks with my overflowing string barrel.  There's lots more spring cleaning and organizing of the stash that could be done but I'm calling it quits for now.

I ordered Bonnie K. Hunter's String Fling as a Mother's Day treat for myself.  Steve took me to Yard-n-Garden Land as a Mother's day treat for himself, a bit more than me.  I'm letting him plant and dig in the dirt, which is what he seems to like best.  I am being lazy today and not doing much other than blogging and sewing.  I really should be grading 6th and 7th grade papers, and doing my extra Latin lessons.

And in a few hours Steve and I plan to attend Cedar Tree's Belt Buckle Ball, the school's annual fundraising auction.  My signature quilt will be in the live auction -- which automatically means we can't afford it, so that's good for the school.

I close with this little bit of random wisdom, translated into Latin:

The way into Mordor is not simple?

Thank you for your sweet comments about my blog! Seeing that photo makes me even more excited to receive the prize! Thanks for checking out my blog... as you can tell I'm pretty obsessed with scraps! :)