Steve took the girls to the Hazel Dell Parade of Bands this morning... I took a year off.  I hear the Little League pitchers were pitching the candy a little too hard at the bystanders, and at least one injury requiring urgent care resulted.

Secundus ran a 5k this morning, and reportedly celebrated by jumping in a lake.  That and the lollipop injury have me reminiscing about all his various trips to the ER.  There was the attempt to pick kiwis off the vine by climbing the fence and hanging, monkey-style, over the pavement while picking.  That was about 2 weeks before his 3rd birthday and required a 911 call but not an ambulance trip, and the ER had to call in a plastic surgeon for the repair, and he lost his front baby teeth early.  That was our introduction to the traumatic injury ER trip.  The rest were relatively easy by comparison.  He followed it up with the injury from jumping/falling off a piece of furniture (I think it was a dresser) onto a Lego piece that imprinted on his scalp.  Then the time he fell off his chair during family devotions.  Then the time he was attempting to play Spiderman on the swingset and created his most interesting laceration, the one that the doctor used to train the intern on.  That was right before Quarta's delivery by C-section, and I remember using one of our 2 spare surgical staple removers to take out the staples myself while sitting in my hospital bed.  (I have no medical training, but by this time I was pretty close to confident that I could put the sutures in myself if they just gave me a pack of supplies to keep at home, and I can certainly take out surgical staples).  There was another one that Steve took care of while I was shopping one Memorial Day, and there was the foot injury when he was deconstructing some old drywall and boards and stepped on a board with a nail instead of around it.  I feel like there should be some others listed, but I've forgotten.  Here he is looking angelic as Pooh in the 2nd grade play.  This was right in the middle of those traumatic injury years.  Now, it's nice to see him considering a career in the medical field... possibly by way of giving back for all those challenges he posed the ER personnel. 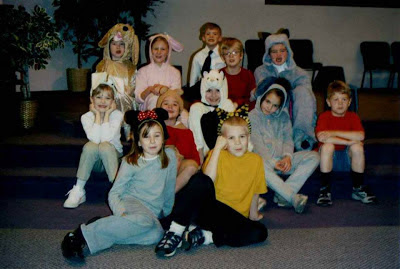 The Orca Bay quilt is now mounted on the Megaquilter.  I'm planning a fast and easy, fairly mindless quilting pattern for it.  It has so many pieces it should really have simple quilting.  I keep coming around to Saturdays and thinking I'd like to go shopping, but then when I actually come around to it, I have so many projects and stash that I can't bring myself to add to them until I clear some things out.  Plus, I'm usually dead-bone-exhausted-tired on Saturdays after a full week of teaching.  So I guess I should be thankful I am not adding to my stash of fabric and yarn.  But I really wish I could learn Molly Weasley's trick of making the needles knit by themselves while I do other things.  And it would be nice to have a quilting or yarn shop nearby, too.  When you have to drive 30 minutes to get there, it's easier to resist the temptation.

Daniel is home and we are enjoying having his presence once again.  He is very appreciative of home cooking, but really enjoyed his freshman year.  He found a great time-waster game for Steve, whose fantasy has always been for someone to drop him in the middle of nowhere and see how long it took to figure out where he was.  Well, they made a game just for him, and it's fun for other people too, even if we don't come as close.  It's called GeoGuessr and I warn you, it's good for several lost hours.

A few weeks ago I was blog-browsing when a virus of some kind replaced the desired blog with a notification that my computer was under threat and I would need to clean my system by taking some sort of action, which was doubtless a bad idea.  I was suspicious enough about it that I wouldn't have clicked on the link they provided --hovering over it there was something about beer in the link -- but then I noticed the misspelling on the "Microsoft" alert - can you see it in the screen capture?  Potential threats that migth compromise your privacy?  My autocorrect even tries to catch that.  Nice try, virus people, but get a proofreader. 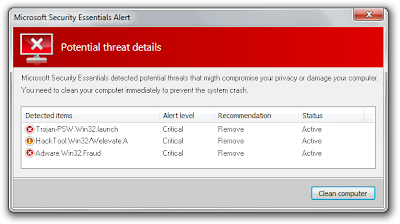