Well, April has now come and gone.  My UFO list for April was as follows: 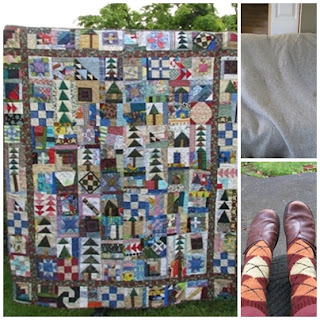 Finished in April: The argyle socks, the felted blanket, the Crumbs auction quilt.  I'm pretty pleased with those.  The felted blanket was an unplanned project, and already Secundus in particular has shown great appreciation for it in late-night TV watching sessions.
And now, I need to come up with some sorta-kinda goals for May. 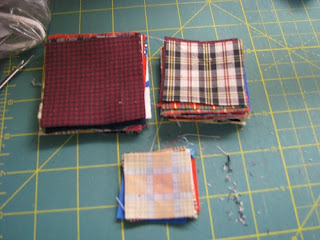 What with gardening season upon us and teacher burnout at its annual high, that should be enough. 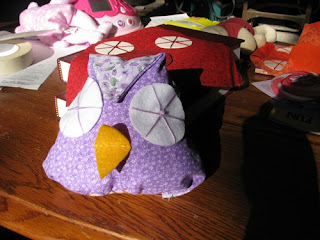 Here's a little owl that Quarta made this week, with additional owls waiting to be assembled.  Aunt Carol found the instructions here.  Then she sent the kits for Quarta to assemble on the new Bernina. 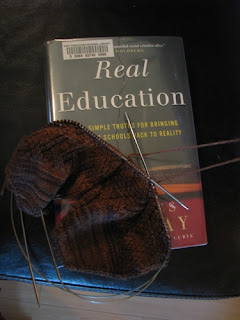 Knitting is going very slowly.  This is a repeat picture, but not much more progress has been made. As mentioned above I'm getting a little burned out on socks.  This is a pretty twisted stitch pattern but my mental state might be better off with something in garter stitch right now.  Real Education by Charles Murray was a challenging book that deserves to be talked over quite thoroughly among leaders in education.  His thoughts on IQ testing and who should go to college, particularly, are very controversial but I tend to think he may be on to something. 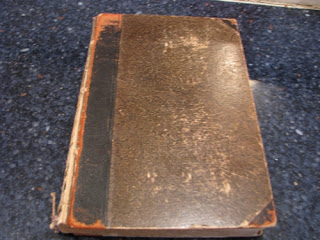 Here's a new acquisition: my knitting buddy Joyce thought of me and passed along this 1900 edition of a Compendium of Dogmatic Theology in Latin.  The binding is falling apart and the only other language that appears in it is German (okay, there are a few Greek phrases too). 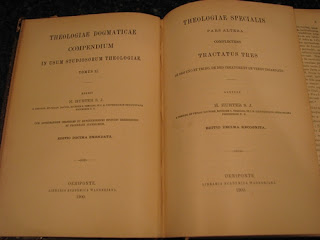 Closer examination of the title page revealed the author, H. Hurter, was a Jesuit. (The initials S.J. after the name are a giveaway).  Now, because of Henle Latin, I have a soft spot for the Jesuits.  I think they are the brain trust of the Catholic church the way Reformed theologians are the brain trust of the Protestants.  It's probably only fair to point out, as Steve does, that they were responsible for many of the abuses of the Counter-Reformation.  In any case, I had a hard time finding out where this was actually published (it's volume 2 of a 3 volume set, as it turns out).  I finally Googled "Oeniponte." Oenipons in Latin means "bridge over the Inn" or "Innsbruck."  So it was published in Innsbruck, where the University is the outgrowth of a Jesuit-founded grammar school.  The theological Latin is a little too dense for me to figure out easily.  What I'm mainly curious is, knowing the Higher Criticism that came out of Germany in that era, is this textbook a critical response to it, or part of the onslaught?