I'm not great at multitasking, especially this time of year.  I spaced out twice yesterday about "Mom" things -- I didn't make sure the kids were wearing their dress uniform for the assembly, but by gum, I did the calligraphy for the Math Olympiad certificates that were presented at the assembly!  And then in the afternoon I came home exhausted, napped a tiny bit, and then was entering grades diligently in the computer files when the phone rang to remind me that Tertia was waiting for me to pick her up for her orthodontist appointment.  We were 40 minutes late, but the grades are now done.  Anybody want to take over cooking dinner for the next two weeks?

I have no stunning progress to report on either the knitting or the quilting fronts, but I seem to be gravitating toward little mindless projects that use up scraps.  And I haven't finished reading any books lately, but I get a page here or a page there.  It's just that time of year. 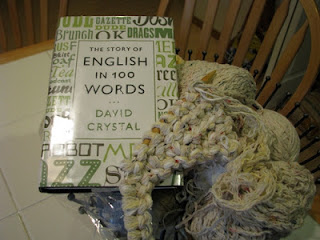 I started another rug out of scrap cotton yarn from recycled sweaters, like my previous one but a little smaller.  I'm reading The Story of English in 100 Words by David Crystal.  It's fascinating, with lots of little tidbits about "jail" vs. "gaol" and "shirt" vs. "skirt." 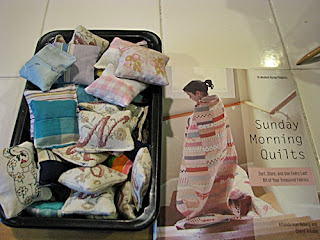 Sunday Morning Quilts is inspiring, although I was just expecting another "modern" quilt book -- I want to reread all their tips for scrap organization, and I want to make most of those quilts.  What I am doing instead is sewing little lavender sachets with the gallon bag full of lavender from last year's crops and a bunch of Grandma's scraps.  Plus my old alphabet skirt -- people who knew me 20 years ago might remember that old favorite that I haven't been able to fit into since Daniel was born... now all cut up for sachets. It smells nice in my sewing corner! 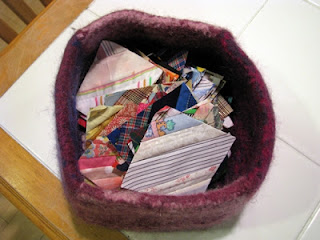 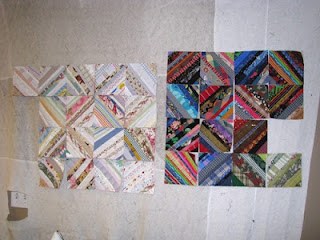 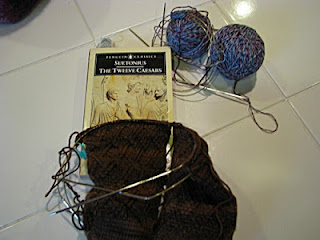 Sock knitting on the brown Farmer McGregor socks is turning into a slog, so I started another pair that will be just plain knitting, out of some Tofootsies that Joyce gave me.  And I'm finally reading Suetonius.  About time, right? 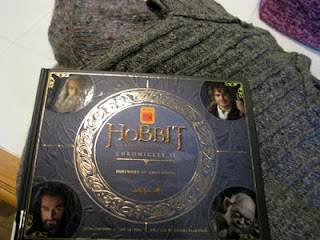 A really cool book I found at the library, in the Geek-Out category: The Hobbit Chronicles II.  Everything you might ever want to know about how they have improved Hobbit feet, the proportion of Dwarf heads to bodies and prosthetic hands and head appliances, as well as snippets from the casting directors and actors.  Those are two different gray tweed sweaters behind it that I plan to deconstruct for their yarn soon.

I didn't blog yesterday because I was so tired and was planning to go to be early, but then a group of kids from church who play Frisbee regularly at the park down the street (and our kids bailed yesterday because it was raining) had an accident; one of the older boys broke his leg while they played soccer, and the rest of the crowd including the younger siblings turned up at our house as a waiting room until the ambulance left and other arrangements could be made for their ride home.  So they drank hot cocoa and played I Doubt It around the table.  I threw a sweater and slippers on over my jammies and carried on.  So poor Stephen's surgery is scheduled for this afternoon apparently, I found out at school this morning.  We'll be praying for him.
Posted by Kathy at 11:04 AM

I looked for Sunday Morning Quilts at my online library url, and it isn't there, so I looked on Amazon. I think this goes on my wish list. I liked some of the quilts, and would like to read the organization parts, too. Thanks for the review. I hope the young man who had leg surgery has come through with flying colors and will soon be back to frisbee in the park. Love those neutral string blocks. I'll have to think about some of those!