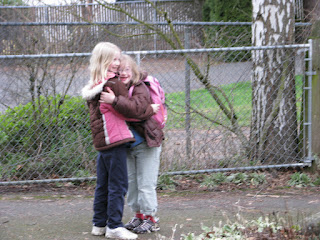 Tomorrow is World Down Syndrome Day.  Trisomy of the 21st chromosome or "Trisomy 21" = 3/21.  Get it?  There is beautiful symmetry in those numbers, if you think about them.  I don't usually wax poetic about math, but 3 and 7 are both numbers representative of perfection.  Three times seven, a trinity of perfection on the 21st chromosome, and children with Down syndrome get it threefold.  They are, indeed, genetically blessed, and I wonder sometimes why the world sees them as imperfect.

The world does see them as imperfect, unfortunately.  Only 10% of those diagnosed prenatally are born... and that's not because of any medical problems, either.  Recently a "wrongful birth" lawsuit awarded nearly $3 million to a couple whose daughter was born with Down syndrome after testing indicated she did not have it.  They would have had her killed prenatally if they had known.  Now we have even "better" tests, giving results earlier in pregnancy, and some experts predict that it may be possible to create a world without Down syndrome.  Funding for research in Down syndrome is hard enough to come by; if the population is reduced much more, it will most likely dry up altogether.  The tragedy of all this is that, of all genetic disorders, Down syndrome is by far the easiest to live with, and live well.  The days of routine institutionalization (at least in the U.S.)  are so far in the past, and positive role models with Down syndrome are so easy to come by, that I truly do not understand why the negative stereotypes persist.  If I can do a little with this blog to help that, all the better.

At least in the Western world, individuals with Down syndrome are provided the best medical care once they are born, and with intensive education, they are living lives that are productive and independent.  I remember being surprised to find out that some people were a bit envious of me for having a baby with Down syndrome.  I discovered why that might be when she was the mildest-tempered of all my four children, the quickest to potty-train, and the most unfailingly cheerful.  For a lovely article with some perspectives on children with Down syndrome and why they should be welcomed, check this one out.

Some other thoughts to check out:

Why you should avoid the "R-word" as a joke or insult.

The beautiful story of Katie, adopted from Eastern Europe at age 9 weighing less than 11 pounds.  She has doubled her weight in a few months with her forever family and has opened the way for other neglected children to be adopted as well.  Reece's Rainbow is an adoption ministry specializing in facilitating international Down syndrome adoptions; many children languish in orphanages and even adult mental institutions who would blossom and grow with a loving and stable family.

Reasons to celebrate Down syndrome.

Enjoying the Small Things, capturing the beauty of these children.

Noah's Dad, who blogs about the joys and challenges of bringing up a very special baby.