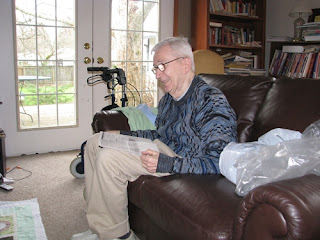 My Father-in-Law, Theodore Woolsey Chapman, was born in 1926 in Hokkaido, Japan, the 4th of 6 children of Presbyterian missionaries.  Everyone always describes him as "sweet," "gentle," and "loving."  Hard to beat that, really.  He was unfailingly polite: he never forgot to say "thank you" or to pray for blessings on his loved ones.  He would take care of little details that no one else thought about, and when he became too old to do those little things he certainly appreciated when someone would do them for him.  We suspect, knowing him, that his last words and thoughts were directed at the paramedics who attended him in the ambulance, thanking them and just enjoying the ride.

He had bad eyesight as a child and made at least one ocean voyage back to America for eye surgery.  In the process, he developed a life-long love of ships, which would lead to a career as a naval architect, working as a civilian for the U.S. Navy.  World War II obviously interfered with missions work in Japan, so the whole family was stateside for awhile and his father did chaplain work at a Japanese internment camp.

He married somewhat later in life, when some of his family had probably given up on him as destined to be a bachelor, to my mother-in-law, Theodora.  Theodore and Theodora ... Ted and Teddy.  They raised three children, first in Bremerton, WA and then in Rockville, MD.  Last summer when we celebrated their 50th wedding anniversary (a little early), all 11 grandchildren showed up too. 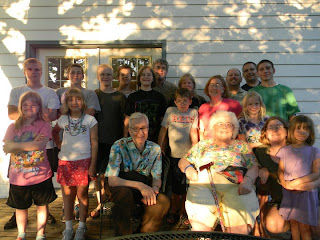 The actual 50th wedding anniversary, and his 85th birthday, came right after Christmas.  We're really glad we took him to Benihana's for his birthday.  He enjoyed it. 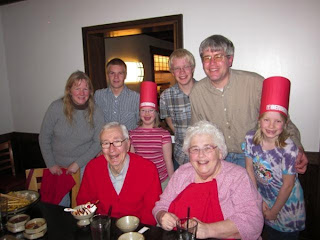 Families should enjoy times together, because time is always too short.
Posted by Kathy at 5:09 PM

This is priceless,Kathy! I wish I would have gotten the opportunity to meet him. He sounds like a fantastic guy. You are truly blessed to have such a wonderful family.