Political Tuesday: In Defense of the All-American Sweater 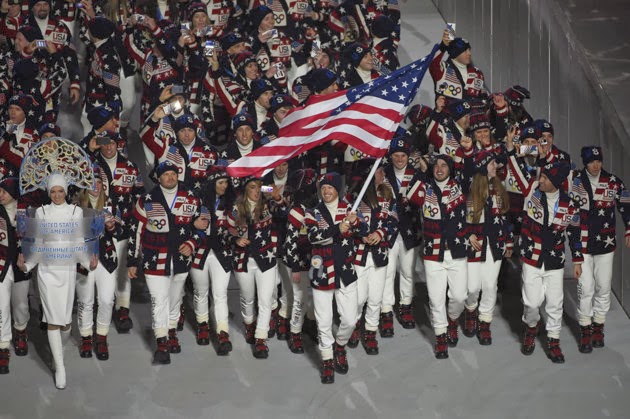 As a conservative Republican in a blue state, a teacher of an ancient language to middle-schoolers, and a general gadfly-about-town, I'm used to espousing unpopular opinions, so I'll venture into the political minefield today and say I think the sweaters worn by the American Olympic athletes during the opening ceremonies were perfect.  You can read a little about their all-American origin here.

Now on Ravelry and Facebook and other internet gathering-sites, the nay-sayers are loud in condemnation of the Ralph Lauren design.  Words like "fugly," "grandma," "ugly Christmas sweater" are among the kinder things being said.  Some don't like the fact that they were not hand-knit (although a lot of handwork went into the assembly, they were knit on machines).  Some dislike the fact that Ralph Lauren worked his "Polo" logo into them -- too commercial, I guess, and as we all know, the Olympic games are far above that sort of crass consumerism.

I like the sweaters because they pay homage to two American crafts: knitting, obviously, but also patchwork quilting. They both happen to be my own favorite hobbies.  Quilting, especially, exemplifies the resourcefulness and thrift of the American pioneers, and deserves a place of honor in the costumes of our finest young athletes.  Betsy Ross used some outstanding patchwork skills when she stitched the first flag. And that flag is not one of the quiet, shy, retiring flags that lets other countries do whatever they want so long as we're left alone.  Ours is a flag that wants to be noticed, that waves even prouder when there is tyranny to confront.  And we are not a nation of snobs.  Personally, I embrace the heritage of my grandparents and great-grandparents, Midwest farmers all, who valued things like finely-made clothes because they had to work so hard to earn them.

The sweaters may be a little too over-the-top for daily wear, but there is no denying that when the Olympic delegation entered the stadium waving their Star-Spangled Banner, it looked like a fireworks display had gone off.  America's champions, free, brave, breaking new boundaries of athleticism and personal achievement -- if they gush about their native country, you can be pretty sure that it's based on their genuine feelings, not because of behind-the-scenes pressure to say positive things about Vladimir Putin.

And if we want to get catty about national costumes, how about those escorts wearing the cake-decoration hats and carrying plastic barrel signs?
Posted by Kathy at 8:05 PM

I read some of the controversy before the games started. With no TV, I'm missing all the games, and that's the only sad thing about not having one! I love the games, summer and winter. Honestly? I LOVE the sweaters. If they were available for the average Josephine, and didn't cost a fortune, I'd buy one! I'm sure they are warm, and I love the design. It's so ... American!