For the last two days, I've been home from school on (arguably) "snow days".  Yesterday it was a 2-hour late start for the district we follow on top of a 2 hour early release for our school, so it was a snow day on a technicality.  Today it was attributed to freezing fog and black ice, but I was able to get out and do the shopping at Winco when I still thought it was only a 2-hour late start, and the roads were fine.  I came home to be told that there was no school because the roads were too icy.  Hmm.  Well, I'll take it.  I'm a little worried about how we're going to make up all the missed lesson plans, but that's a problem to resolve when I'm actually at school with access to my actual lesson plans. 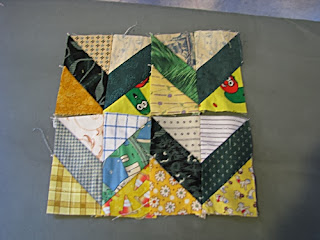 I've been cranking out chevrons for clue #2 of Celtic Solstice.  What do you think about Bob and Larry peeking out?  Too much? 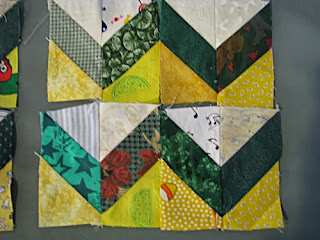 I have some plain yellow fabric that I played with my Book of Kells rubber stamps, too.  Very appropriate for this mystery! There hasn't been quite as much time as I hoped to sew this week, and I'm fighting the pre-Christmas fatigue thing.  What, you didn't know that was a thing?  You must not have hyperactive kids. 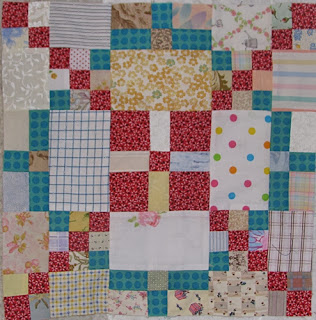 This is the first block I've made in the APQ quilt-along, a low-volume Burgoyne Surrounded.  I'm so pleased with the way it looks, I definitely want to make more! 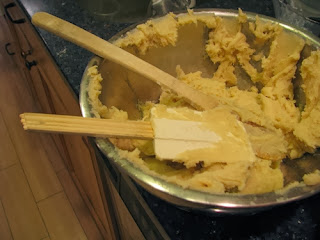 I couldn't take both Secundus and Quarta bouncing off the walls and playing with candle wax all day, so I suggested to Secundus that he bake some cookies, and directed him to Filled Raisin Cookies, which have been on my brain lately.  See, lots of people in the Sew Mama Sew giveaway day/week have been asking about your favorite Christmas treat, and this is it, or one of them.  Note the broken spatula.  This is what happens when Secundus cooks.  He also put in 2 tablespoons rather than 2 teaspoons of vanilla in the raisin filling.  It will probably be ok.  When he's done with the kitchen, I'll let Quarta make fudge.  For some reason, they never want to do anything boring like cleaning the house; that's apparently my job. 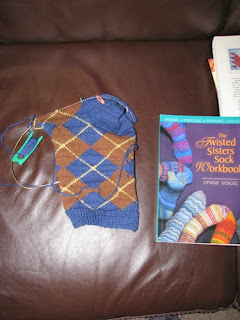 Not much progress since last week on my argyles, so I'll use last week's picture.  I did finish the argyle pattern for the first sock and jumped to the ribbing for the second.  I'm a little concerned about whether I'll have enough blue.

On top of the snow days, both Steve's and my cars needed maintenance today, so we've been in and out of the dealership.  Steve worked from home this morning, but I had to laugh because he put Kleenex in his ears to block out the noise.  I'm really hoping for no snow days tomorrow, so I can at least have a half day of a quiet house and no complaints that there's "nothing to do!"
Posted by Kathy at 4:45 PM

Your chevrons are looking good!