Warning:  the following photo is not for the faint of heart.  This is what greeted me after emptying the fridge for its defrost and cleaning today.  Yes, I'm pretty sure there were a lot of different microorganisms growing in there.  I made Steve deal with the worst of it. Then I spent most of the day, on and off, cleaning and scrubbing. 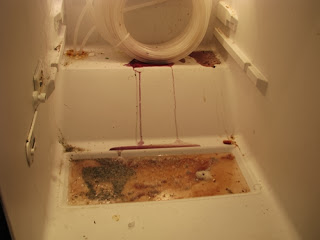 It looks so much better now.  Our downstairs freezer is packed to the gills and the two coolers are holding most of the fridge contents.  I feel like I know my refrigerator a lot better.  I had never figured out how to take off the bottom grille before.  I found a set of Mickey and Minnie Mouse magnets and some ferocious dust bunnies.  This is only the second fridge we've bought in 21 years of marriage - the first one lasted from 1993 to 2007, and this one is still young by comparison.  But if I can get it working without churning out frost so much, it would be nice not to have to buy another for a few more years.  After we put the food back in it, I need to defrost the basement freezer.

In between the fridge cleaning there was a little sewing on my secret Christmas project, and I made a test block for the APQ quiltalong, and a tiny bit of Celtic Solstice.  I took Quarta to the library, did my two Latin assignments (but didn't touch my grading) and was present for watching 2 Dr. Who episodes and the last of The Sound of Music.

Yesterday was a bizarre weather day; it looked like a small dusting of snow in the morning, but it was quite a difficult commute to school for everyone, and the general consensus seems to be that it should have been a snow day, but it wasn't.  I grew up in an area where we always heard about "lake effect" snow but never actually got any ourselves.  Now, it appears that if conditions are just right we can get "river effect" snow from the Columbia.  Only, it doesn't happen very often.

Even the people who couldn't make it to school made it to yesterday evening's production of A Christmas Carol.  It was beautifully done.  Tertia couldn't stop chattering afterward about Mrs. M's makeup - she played the Ghost of Christmas Future, walked on stilts, and had skeletal makeup and a skeletal claw.  Definitely creepy.