Knitting and Quilting Year in Review 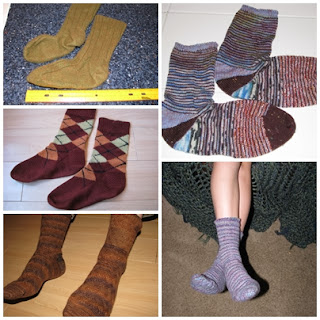 For a knitting blogger, I started the year well and finished with a limp.  I was determined to make a lot of socks for my family because they are enjoyed by everyone.  However, two of the pairs I labored over for my husband felted beyond wearability: top and bottom left.  Note to self: use Knit Picks yarn only with great caution from now on.  The argyles I made for myself are from the same yarn but either it didn't felt or the pattern was loose enough to allow for it: I'm still wearing and enjoying them.  Daniel's Klingon socks have at least one hole in them but he wears them constantly and still likes them.  Quarta's purple socks I think are still wearable. 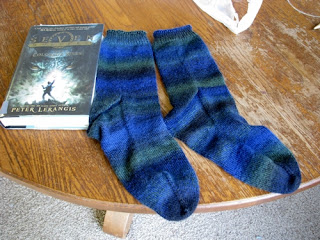 These were another pair I finished for Steve this year, from the Zauberball I bought in January, and they were successful.  That may be all the socks: also I finished two scrap yarn rugs from unraveled cotton sweaters: 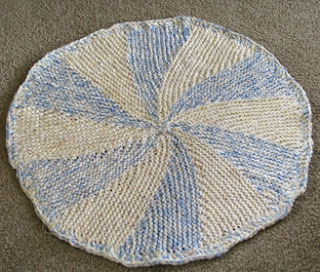 The second is almost identical.  I started a few other knitting projects but they are hibernating at the moment.  All in all, it is time I admitted that I'm in a knitting slump.  I want to get back to enjoying knitting in the New Year, and that probably means laying off the socks for awhile, unless I knit them with sturdy German yarn in simple patterns and intersperse them with sweaters and shawls. 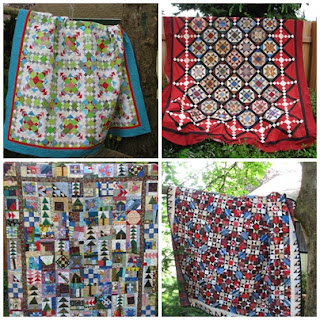 2013 was another good year for quilts; although I didn't finish quite as many as in past years, I'm pleased with the ones I did.  Clockwise from top left: Easy Street, Country Stars (top only - still not quilted), Orca Bay, and the Cedar Tree auction signature quilt.  I have the Farmer's Wife in progress on the frame, and after that I owe my mother-in-law a quilting job and then I will quilt the Country Stars.  I'm happy with the various quilts I have in progress, too: the Celtic Solstice mystery, my String Star, Not All Who Wander are Lost, the APQ quiltalong, and some other random scrappy projects that are just waiting to coalesce into the next big plan.

At the beginning of 2013 I set some loose goals for the year, listing 20 "UFOs" that were either on my dream list or in various stages of progress.  Of those, I am counting the following as accomplished:


So 9 out of the list is not really bad.  I will reevaluate the remaining things that didn't get done and come up with a new master list for 2014 in a day or two.  I notice that I don't enjoy setting goals for knitting as much as for sewing; in the past, I have wanted to give myself permission to flit from project to project because knitting takes so much more time and my tastes do change.  But clearly, I am not devastated about it when I don't reach my sewing goals for the year, so maybe I will think about having a combined list or a separate knitting list for 2014.

I have some other ideas for blog projects percolating in my head, not all of them craft related, but we'll see where the whimsey leads.