So, last weekend Steve and I went up to Seattle.  We left before the kids were off school, leaving Daniel in charge.  Now that we have two licensed drivers among our children this is possible, although I'm still having a hard time wrapping the mind around it. 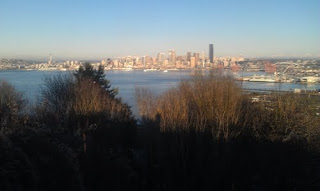 Seattle skyline, pretty as ever.  We stayed at the Hyatt, and our window looked out on the Space Needle.  It's kind of hypnotic to watch the elevators going up and down.  From a distance the flag on top looked like a giant bird, maybe even a pterodactyl.  But it was really just a Seahawks flag. 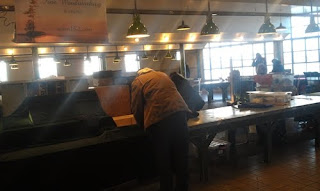 Saturday morning we walked down to Pike Place Market and arrived as many of the stalls were just setting up for the day.
﻿ 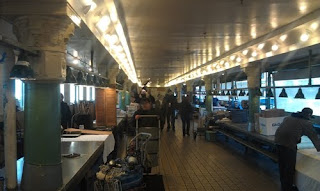 For some inexplicable reason, we both were hailed as "cool" while at the market.  For me, it was in the little tea and spice shop were we bought apricot and huckleberry tea.  I was wearing my Cityscape sweater, and not one, not two, but three different shop workers thought it was amazing.  Yeah, it felt good.  For Steve, it was in the little quilt shop, where he showed the owners his app for identifying unknown songs - soundhorn, I think it's called?  They both thought that was amazing.  Well, it is, actually, it would be all I needed for a very long evening's entertainment.  But the point was, we were both considered cool... in Seattle, the epicenter of cool.  I know it won't last, but we did enjoy the experience. 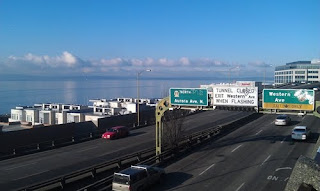 Steve needs reminders to take pictures with his phone camera, but when he can, he always includes a highway.  It was unusually sunny and clear, but a bit cold.  We did a lot of walking. 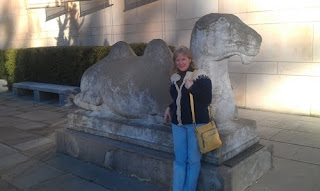 After the market and lunch at Starbucks (thanks, students, for the Christmas gift cards!) we took in the Asian Art Museum.  Lots of neat stuff there.  I liked the guardian camels, donated "for the enjoyment of the children of Seattle."  There was a cool conservatory building nearby, with carnivorous pitcher plants and tropical orchids of breathtaking beauty.  Then we took in a concert of Celtic music, which was quite nice.  Turns out it was the farewell concert for a local group that specialized in Scots Gaelic, and the opening act was a young artist, Kyle Carey, who combines Gaelic with Americana in a fascinating way.
Sunday morning we broke out of our mold and visited Mars Hill, something I've always been curious about.  Okay, check that off the bucket list.  The sermon was good, and I actually preferred the indie rock style music to what passes for worship music at a lot of modern churches.  But once is probably enough.
Then it was back to the wars on Monday.  Oh, what a Monday!  Worries about students' academic performance, backlog of grading.  Then the kicker.  I had taken advantage of the half hour assembly period to print out and copy quizzes and final exams.  When I got back to my computer I figured I had just enough time to click on one link... but then my browser froze up for a minute, and I looked down to do some grading while it unfroze.  I made a little plinking sound, and I looked up to be notified that antivirus had detected and neutralized a Trojan Horse, nothing to be concerned about.  Then the next thing I knew, I was staring at myself on my screen in a kind of "mug shot."  Framed around it was a stern warning that I had been caught downloading information illegally and my computer was locked and my personal information would be handed over to the FBI unless I clicked the little green button to pay the fine.  My own webcam had been hijacked and turned against me.
Okay, I'm not that stupid, thank you very much.  Nor do I have a guilty conscience because I do not download anything illegally.  I did what any techically-unproficient knows to do, I rebooted.  Still there.  Then I called Steve.  He was in a meeting but said he would try to deal with it in the afternoon, but when I got home maybe Daniel could try alt-F4 or something like that.  Then I had to teach my last class, and then I had teacher's meeting, and then I had to go to the doctor for my annual exam (which was more like my quadrennial exam ... I'm telling you, it was one of those epic Mondays!)  When I finally got home Daniel took one look at the laptop and went into Nerd Herd mode.  I left him to it, but it was like anxiously pacing back and forth while your loved one is in surgery.  Apparently this is the kind of virus that replicates itself, renames itself randomly, and plants itself in several places, and it has little minion malware offshoots that also seek to cause havoc.  I guess the technical name for it is ransomware, because it holds your computer for ransom.  I'd been having trouble with the firewall turning itself off for the last few weeks; don't know if that was related, but it might certainly be how it got on in the first place.  Daniel continued to debug and run system restores and virus scans and malware scans for a good 28 hours from diagnosis to the time late this afternoon when he pronounced the all-clear (at some point late yesterday, he got that stubborn look on his face that I know so well from other members of the family and pronounced that now it was a personal challenge!).  I had to go to school computer-less today, which wasn't all that bad because I rarely have time to do more than check messages anyway.
And the absolute cherry on the top of Monday was when I showed up at Starbucks for knit night and no other knitters were there.  I ordered my tall decaf vanilla spice latte to go and came home, tucked myself in bed, and knitted and read until I fell asleep early.
So I hope you understand why Kathy was not on the blog yesterday.  All political commentary, book reviews, and knitting and quilting updates will have to wait until the laptop and I recover from Monday.
Posted by Kathy at 7:36 PM