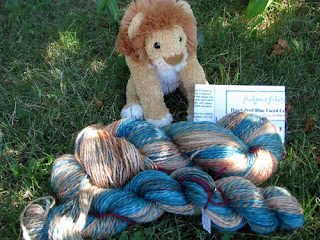 I keep intending to be a more serious blogger in the summer.  It's not like I don't have serious thoughts, about Issues of the Day, Philosophy, Politics, History.  What do you do with your mind while your hands are busy, if not have serious thoughts?  But does anyone ever feel like writing it all down in the summer?  And if so, does anyone feel like reading it?  So I'm blogging with the bare basics of summer fun and may slip in a serious thought or two if the mood strikes.  The Tour de Fleece is first off.  Here is my lion mascot posing with the two skeins of finished yarn I plied yesterday.  About 550 yards of light fingering BFL 2-ply dyed by Frabjous Fibers in the "Atlantis" colorway.  I like the way the teals and copper and alabaster stayed remarkably distinct during the plying. 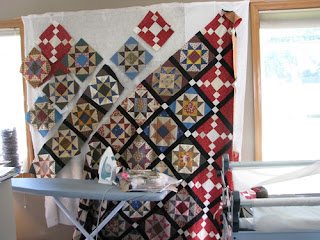 The Country Stars quilt is coming together since last week, but I have been lazy the last few days - this is the same as Monday's photo.  And I have still not put the Farmer's Wife quilt on the frame.  But I have decided to enter Jack's Chain, Orca Bay, and Feathered Star in the Clark County fair.  All were finished this last year, even if the tops were finished before that.  I'm pleased with the fact that my tops are sitting for a shorter time before machine quilting than before I started blogging. 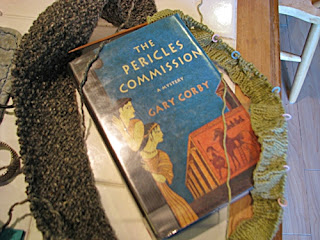 I am not sure which of three knitting projects I want to commit to, so I split the photo for the yarn-along between two.  (There's also a pair of socks on the needles, but no photo of them yet because they are just toes.)  If I want to knit wool, there's the Carnaby skirt on the left.  And if I want nice soft cotton, it's Rosalind on the right in Green Tea Simply Cotton.

I just finished reading The Pericles Commission, first in a series of mystery novels set in ancient Athens by Gary Corby.  Nicolaos is the middle-class son of a sculptor, but he has ambitions beyond carrying on the family business -- ambitions that may be achievable when Ephialtes, the father of the newborn Athenian democracy, falls murdered at his feet and Pericles, his would-be successor, asks him to investigate the crime.  But politics in Athens is a dangerous business.  Nico is hindered as much as helped by a large cast of real historical characters, including Diotima, priestess of Artemis, and Nico's annoyingly insightful little brother, Socrates.  It's a lighthearted romp and the author does have a gift for bringing ancient history to life.  The cover art and writing style might convince you it's designed for the middle readers that Caroline Lawrence's Roman Mysteries series is aimed at, but no, this is definitely for adults.  I look forward to reading the other two books in the series as soon as I can get them from the library.