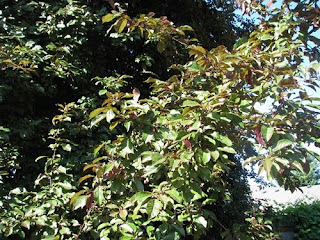 The plum tree is going to have one of those years, it looks like.  You can't tell until you get right up close... 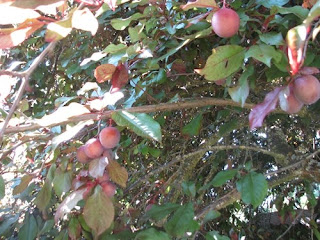 but there are a whole lot of plums on it.  By the end of the month we'll need to have a plan. 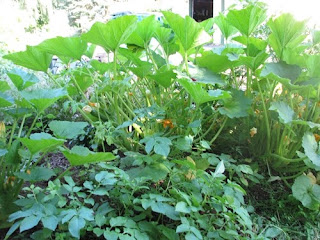 The zucchini plants at the end of the driveway are looking very healthy, as are the volunteer potato plants. 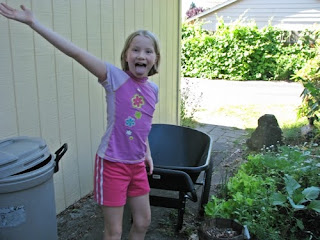 Quarta was supposed to help Steve cart away some of the weeds. 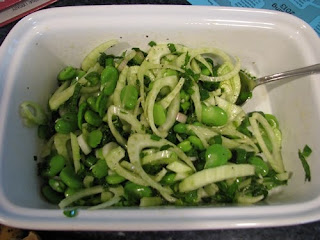 I made this salad - fava bean and fennel - to go with supper.  Although I had never had much of either one of these vegetables before this summer, it's very good.  I left out the parmesan cheese.  Supper was Steve Special - mac and cheese from the box, tuna, peas, and olives. 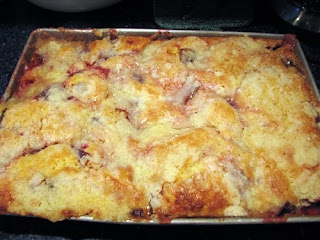 I had plums from 2009 in the freezer, which was maybe the last year the plum tree was this productive.  So I made my version of this recipe - Cornmeal Buckle with Plums - for fellowship dinner after church tomorrow.  This was a recipe I clipped several years back and my adaptation is as follows:

Cornmeal/Plum Buckle for a Crowd

1/2 cup sugar
6 tablespoons flour
1/4 teaspoon salt
1/4 cup (1/2 stick) butter, cut into 1-tablespoon pieces
Cut butter into dry ingredients in a small bowl; set aside.  (This is the same amount as called for in the original recipe)

1 stick (1/2 C) butter, softened
3 cups flour
1/2 cup yellow cornmeal
4 teaspoons baking powder
1 teaspoon salt
2 C sugar
2 eggs
1 cup milk
2 qt. size freezer bags of halved plums, defrosted and excess juice drained
In a large bowl, sift together the flour, cornmeal, baking powder and salt. In another large bowl, beat the butter with the sugar and eggs until it is fairly light and fluffy. Add half of the milk and beat until smooth. Gradually add the remaining milk while beating.

Stir the dry ingredients into the wet ingredients just until well moistened. It will be the texture of cake batter. Fold in the plum pieces. Pour the batter into the baking pan and spread evenly. Scatter the topping mixture evenly over the top. Bake until the top is golden brown and a toothpick inserted in the center comes out clean, about 1 hour.

I double the recipe for the buckle itself but leave the same amount for the topping, and I bake it in a 9x13" pan for a little longer than the original recipe calls for.  I did have some spillover - I could probably have just used one package of plums, but I wanted to clear out the freezer.  I'll clean the oven next week. 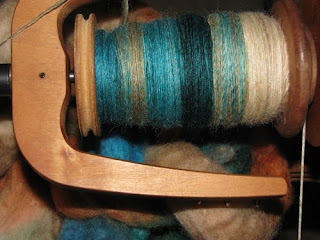 The Tour de Fleece continues.  Last night I spun while Steve and I watched Snow White and the Huntsman.  Tonight we may watch some Wallace and Gromit while the boys play board games with friends. 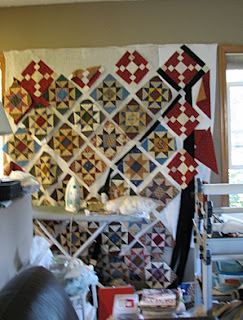 Today I finished all the blocks needed for my Country Stars quilt.  Whee!  Now begins the fun of seaming them together with the sashing.  I think I have the layout the way I want the star blocks to be, but I need to have another look to see if there's something that jumps out at me as being too much of one thing in one place.  I have blocks pinned to other blocks because my design wall isn't quite big enough for a queen-sized quilt.

Your plum tree came up at our house today. We got 6 plums in our weekly produce basket, and Grace said - "Chloe has a whole tree of these in her back yard!"