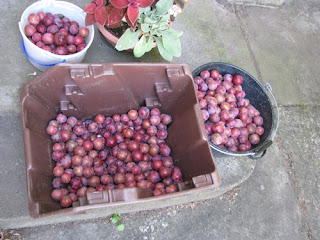 So, the last few days have consisted largely of wrangling with the plum tree.  It has assumed a character of gargantuan importance in our -- well, my -- domestic life. 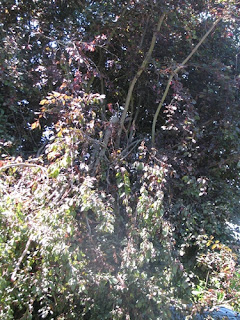 I worked first on the branches that had broken or bent down to ground level.  Literally I could break off a 12" twig with one hand and there would be 10 plums on it.  I pruned as I picked.  Many of these plums were not fully ripe and sweet and plump, but still they work well for jam.  Many friends have come and picked up some of our plum bounty for their own purposes.  Others have expressed interest but not shown up.  I will soon send the boys with bags of plums to leave on their doorsteps. 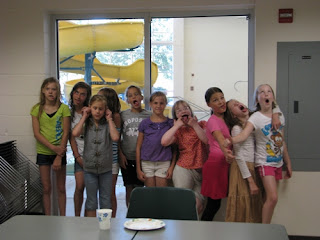 We did host a birthday party yesterday at the Jim Parsley Center for Quarta, Tertia and 8 friends.  Swimming for 2 hours, then pizza, cupcakes and silly-face pictures. 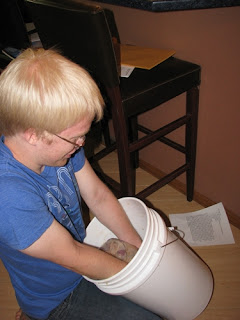 Daniel begins his experiment with wine-making.  Plum wine, of course.  We went to the fascinating Bader's shop Thursday to get supplies.  This is more chemistry than I really want to master but he's interested in the process.  And by the time the wine is ready, he might even be old enough to drink it.

Plum recipe roundup:
I have dehydrated 2 loads of plums so far: they are good for tart, chewy snacks and for school lunches.

I like to cut plums in half and remove the pits, then freeze the halves in quart bags.  They are then great for making pies, cobblers, and many different variations on plum cake or pflaumenkuchen.  I have several recipes pinned on Pinterest and several more in my file, but you can hardly go wrong with these plums, especially if you add cinnamon and enough sugar to overcome the natural tartness. This plum torte recipe is amazing.  Plum cake recipes with sour cream or buttermilk in the batter are nice to complement the tart-sweet flavor of the plums, and give it extra richness.  This rhubarb cake recipe is similar to one I have on file and use a lot with plums instead of rhubarb.  Plums also combine well with blackberries, which are ripe around the same time.

Today I made a batch of plum-orange jam (recipe from the Ball Blue Book).  I added the juice of the orange as well as the grated peel and was generous with the plums (because we have so many).  It made nearly 8 cups.

This afternoon I chopped an entire gallon of plums and made Plum Chutney.  I began with the recipe in the Ball Blue Book but changed and added a few things inspired by this recipe.  It smells like essence of autumn with all the spices, and is good with chicken or pork.  It better be, anyway.  It made 7 1/2 pints.

Bring to boil in large stockpot.  Simmer for 1 - 1.5 hours until slightly thickened.  Ladle into pint jars and process 10 minutes in boiling-water canner. 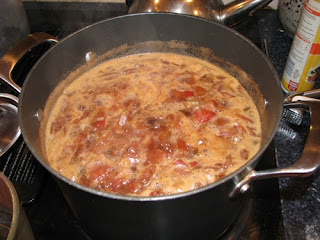 I still have plans for making plum cake of some sort with the fresh plums, and at least one more batch of plum jam, either ordinary plum jam or something like the pflaumenmus I've been hearing about.  Or maybe this one.  Or maybe both! My knitting friend Ilse has convinced me that Germans know some good things about how to use plums.

In between all the plumminess I took the girls and Daniel to the library, and suddenly remembered the estate sale I hadn't had the chance to go to earlier, and ended up buying 20.5 yards of quilting fabric at $2 a yard and made an offer on a bin full of scraps for $5.  And the library was fun, too. 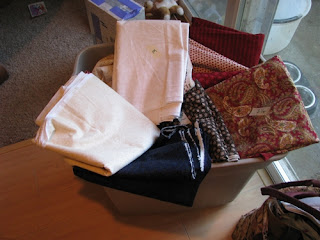