The Future of Down Syndrome 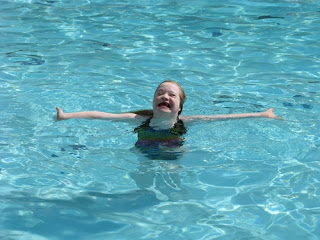 Some of my more recent followers may not know this, but I frequently blog about Down syndrome and engage in a certain amount of advocacy designed to raise awareness about this genetic disorder that affects so many individuals, including my third child, blogname "Tertia."  She was born with Down syndrome nearly 14 years ago and has taken the world by storm, in her own way, ever since.  I think of her as one of God's spies.  And while my children are too old for me to be primarily a "mommy blogger," I still see Down syndrome advocacy as an important part of my calling.

You may have heard the recent news of a scientific breakthrough that can switch off the extra chromosome that causes Down syndrome in a test tube.  While any potential therapies resulting from this are years away, and while we are only beginning to raise the complex ethical questions that will need to be answered before we could go ahead with such therapies (Would it change the essence of the individual?  What are the risks?  How would it be tested? Would you "fix" your child?), there is no denying that this news comes at a critical time.

I know I keep my blog lighthearted most of the time, but the reality is sobering. We live in an age of medical miracles, when individuals with Down syndrome have the greatest possible expectation of high quality of life and long lifespan. The irony is that fewer children are being born with Down syndrome as a direct result of the prenatal diagnostic tests commonly available now.  With the latest generation of tests designed to target the disorder even earlier in pregnancy, the numbers are dropping alarmingly.  Somewhere between 50% and 95% of parents (the numbers are understandably fuzzy) decide to terminate a pregnancy with a Down syndrome diagnosis.  The reasoning for this is even more fuzzy, but at least in part it must be due to overwhelmingly negative portrayals of Down syndrome by medical professionals and in the media.  Even the media has been turning around in recent years, with concerted campaigns to "end the R-word" and positive portrayals of characters with Down syndrome on shows like Glee (perhaps the only likeable characters, actually).  I don't know what doctors are saying to parents these days, but I strongly suspect they put on their serious face for delivering bad news just as the hospital pediatrician did when he spoke to me nearly 14 years ago.  I encourage medical professionals to follow the lead of Dr. Brian Skotko, who has made it his mission to promote a more well-rounded approach by the medical community that takes positive information into account.

What experts fear is that the pool for potential therapeutic treatments (and for the scientific funding to develop them) will not even exist in the near future, so the treatments won't be developed.  There is a concerted effort in the Down syndrome community to promote positive treatments and counteract the overwhelmingly negative, insensitive, out-of-date information about Down syndrome that is commonly distributed to new parents.  Read the excellent series (perhaps misnamed) A Brief History of Down Syndrome at Down wit Dat, and you will realize that we are only a generation removed from routine institutionalization of people with Down syndrome.  Two generations separate us from Hitler's eugenics/extermination program "Aktion T4," which murdered thousands of human beings on the grounds that they were not fit to live in a perfect society.  It is not melodramatic to say that this generation might see the effective elimination of Down syndrome as a medical specialty.  The individuals will remain, but whether in sufficient numbers to command the attention of the community is doubtful.


It's easy to get cynical when the system only works if you follow the money.  I'm glad that people with Down syndrome tend to be naturally anti-cynical themselves, and act as a kind of antidote to an overly cynical society.  Tertia has benefitted greatly from educational therapies that seem common-sense now, but had to be fought for to put in place.  (And by the way, she just finished reading Harry Potter and the Deathly Hallows, on her own). Physical therapy started when she was a baby and is light years ahead of what it was a generation ago.  She was fortunate enough not to need open-heart surgery, but it was there and state-of-the-art, if her heart defects had been any worse.
I think that God's purpose in people like Tertia is not affliction or suffering, but rather a testing of the hearts of those who interact with them.  Mother Teresa reportedly called the disabled "professors of love."  How does our culture do in learning the lessons they teach?  There are heartwarming stories like this one, and heartbreaking stories like the death of Ethan Saylor that highlight just how far we have to go, and how complicated the work is.  I've been working on this blog post for three days now and I know I won't resolve anything by it.  But I'd like it, if you've stuck it out this far, if you would think a bit about how you, personally, can make the world better and not worse for people like Tertia.
Edited 7/23 - Since I wrote this a few days ago I came across a network of Down syndrome blogs and it seemed like a good idea to post this at their blog hop.  Please check out the link for more individual snapshots of what it's like raising a child with Down syndrome.  And I hope to make it a regular feature of my own blog from now on.
Posted by Kathy at 10:35 AM

I agree! One of my cousins is Downs and I can honestly say my world is definitely better with him in it! He is severe on the scale with very limited vocabulary. He is one year older than I am (he's 27 years old) and is a hoot. He's been through a lot of surgeries and 2 years ago was turned away by 3 hospitals because he can't explain how he's feeling. Finally the first called back and told them to get him there ASAP because he was having tons of mini strokes and due to some complications he isn't as mobile but still makes it around. Him and I have and always will have a "special" bond as my family says because he loves being around me and always asks for me :-). Ever since we were kids it was "sa (Melissa) tendo (Nintendo)" or "sa....." He always makes me feel so special and is so full of joy and love that thinking about him or seeing him just puts a huge smile on my face. There is no one that has the same affect on me. He's just pure love and happiness. They told our family he'd never make it to 24 years old and he just continues to prove everyone wrong and I continue to look forward to many more joyous moments with him. My piano teacher always said that those with Downs are a precious gift and I agree. My cousin is more severe than others I have met but my world is better with him in it and having grown up with him.
Thank you for all the work you do to bring more awareness to Downs'!

I too have written extensively on the subject of the pending eugenics. I also write about it a lot in the form of fiction, it's a very real science fiction future I see. Sighs.