We continue to be plagued with raccoons.  Smudge has gone into deep hiding and didn't show up for his food today.

Secundus had his friends over for an all-night Chuck-fest.  7 pizzas, Mexican bean dip, a veggie tray, a pan of brownies, copious amounts of carbonated beverages, 3 pounds of bacon and 30 eggs were consumed.

The binding has been stitched down and the Cedar Tree auction signature quilt is now officially finished!  Photos need to be taken still.

I watched about 3 hours of Project Runway while stitching.  Last night the girls watched The Rescuers on my computer but I kept falling asleep with the needle in my hand.

Is it my imagination, or did Patricia, the Native American designer on Project Runway, shrug off criticism from Nina Garcia with, "Nina is so right-wing conservative sometimes" when what she really meant was "Nina is so racist/insensitive to my ethnic group sometimes"?  This strikes me as problematic on a number of fronts.  First of all, I'm pretty sure Nina is not a conservative right-winger, so she would probably take offense at that.  But my problem is with the equivalency drawn between the disparaging "right-wing conservative" and what she really meant, which was almost certainly "racist" or "bigoted."  It should have been edited out of the final program, but the producers apparently felt it made good TV so they left it in, further deepening the divide in whatever is left of our common culture.  Anyway, I still loved watching the Project Runway season finale and {{SPOILER ALERT}} was thrilled to see the local girl win.

Backyard update: Smudge has resurfaced.  After Steve chased off the raccoon he must have returned to his usual hangout under the back deck.  A black cat in a dark recess is visible primarily by his eyes, as you may be able to see in this photo from years back when he was an inside kitty and liked to crawl into my yarn cupboard: 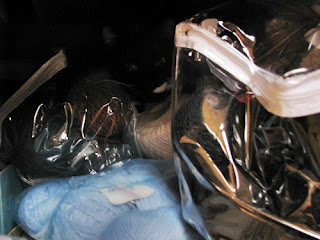 You can also see why he's called Smudge.  I had to doctor the backlighting on this severely even to get that much visible.  Poor Smudge.  He's never been what you might consider smart.  Now he has to live in the wild and compete with the raccoons.

I did a tiny bit of gardening today and swept a bunch of debris off the driveway.  I've been feeling depressed about the state of our yard and garage lately, not to mention the basement.  I did my Caesar's Gallic Wars translation and my Bede's Ecclesiastical History translation, and as has been the case for the last several weeks, I looked at Lucretius' de Rerum Natura and flinched.  After supper (leftover pizza) Steve and I will need to tackle Greek.
Posted by Kathy at 6:01 PM