We have a pest raccoon that has twice shown up in broad daylight now, to gobble Smudge's food on the back porch.  Steve has chased it off with a 2x4 both times, but it's probably living in our tall cedar trees.  We've been bringing in the cat food at night for awhile now, because there used to be three raccoons that would roam the yard after dark... but it's almost worse to have one who comes out in daylight.  Poor Smudge!  He's a total coward to begin with. 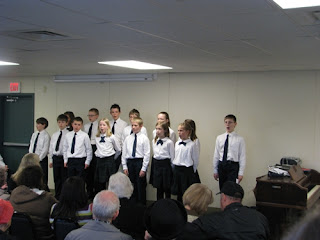 Quarta's class recited The New Colossus and did a skit about Ellis Island. 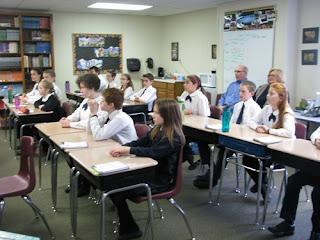 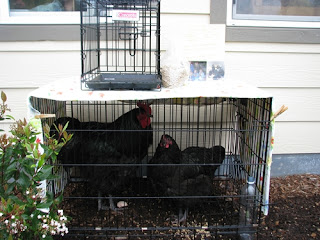 Chaunticleer crowed over the egg that Pertelote laid.  They are graduates of the Kindergarten chick-hatching project of 2012, (this year's 1st graders.)

The Auction signature quilt is on the machine and being quilted, at long last.  Maybe I can finish it in a week or so.

I made a grape pie for tomorrow.  A batch of granola is also toasting in the oven; I am trying some agave nectar in it instead of honey.

Quarta is away at a birthday party at a friend's house; Secundus is working down in Tigard again today; Daniel is nearing the end of an intensive production of Seussical far away in Pennsylvania, and so the only child at home right now is Tertia, who is quiet as a mouse, reading Harry Potter 5 or Star Wars graphic novels.  It gives me a taste of empty-nesting, and I don't like it!  By the way, Tertia finished reading Harry Potter 4 this last week, and was rewarded with watching the movie, mostly from behind her pillow.  Makes my blood boil when I hear about the academic papers proposing infanticide for children with Down syndrome.  And the bioethicists who think the general public is just too unsophisticated to appreciate their argument.

Speaking of well-educated fools... I was glued to the television along with everyone else in the country watching the great Boston manhunt yesterday.  (I don't know how I survived the 2000 election without cable news... Steve laughs at me, but I'm never going back!)  So glad they caught the guy.  I hear that he may have been an alumnus of the prestigious Cambridge Latin School, and a currently enrolled student at U. Mass Dartmouth.  Which begs a whole bunch of questions.  For example: why can't we take the tired, the poor, the huddled masses yearning to breathe free... and teach them something other than how to become murderous, America-hating narcissists?

"I am afraid that the schools will prove the very gates of hell, unless they diligently labor in explaining the Holy Scriptures and engraving them in the heart of the youth."
--Martin Luther
Posted by Kathy at 2:35 PM