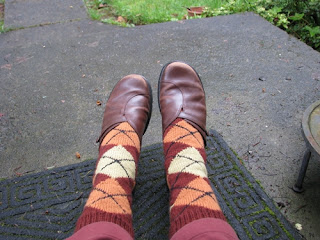 For some reason I think of the Wicked Witch of the East when I look at this picture.  But I love these socks!  My first argyles, and they will probably not be my last.  They were finished over Spring Break during the car trip and used approximately 400 yards of yarn (Knit Picks). 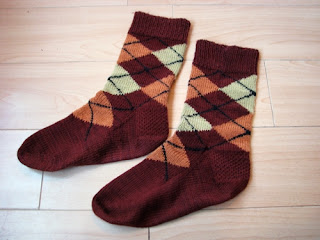 Argyles are knit flat, which goes against just about every modern sensibility.  They have a seam up the inside of each sock -- the sock on the right has the seam facing the camera, but I was able to make it pretty inconspicuous.  I sewed in the ends after completing the colorwork, joined for knitting in the round, and finished the toes up that way after seaming the sides.  Now my biggest worry is that they will shrink during washing.  Other than the general fiddly-ness of the intarsia, these were not difficult socks to knit.  I enjoy colorwork in most forms, and of course they're preppy, which is more or less my style.

Today was the first day back at school after Spring Break.  Sigh.  It was nice while it lasted.  Now it's back to wrassling with contrary 7th graders and hours of extra unpaid and unacknowledged work.  Grades are due Wednesday and I still have one student who hasn't turned in the final exam yet.  Tomorrow is Tertia's first appointment with the orthodontist.  I think we have to have ready our bank statement for them to set up automatic payment withdrawal before they will treat her.