Randomday: What Secundus did on Spring Break 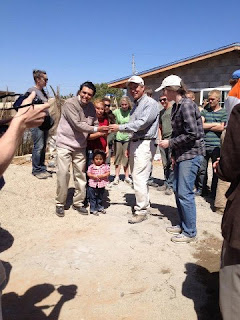 While most of us were relaxing on Spring Break, Secundus went with a group of Cedar Tree students to Mexico and built a house for a deserving family.  He's on the right with crossed arms in this photo of the dedication ceremony. 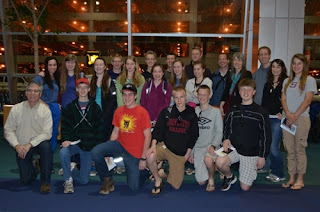 What a fine group of young people. 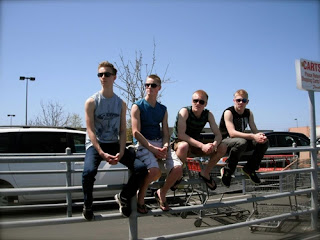 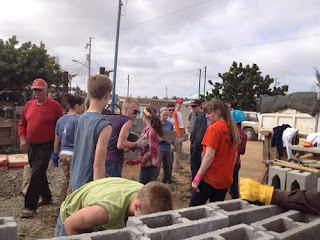 As has always been the case, most shots of Secundus are action shots.  He worked hard.  The little toddler we used to call "El Nino" in the sense of "he's a force of nature" is now all grown up.  He tells me the little kids in Mexico said he was "muy, muy guapo." 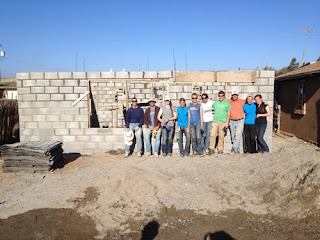 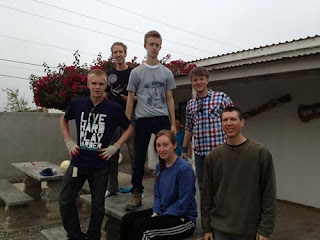 After the walls went up, he worked with the floor team.  He dug drainage ditches under the house, he made trips to the riverbed for more sand. 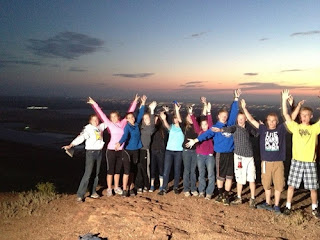 They took a hike at sunset on their final day.  A great experience for all of them.  His words to me after we met him at the airport: "We take so much for granted."
This week, of course, it was back to school and other activities, like the Spring Social.  I took him shopping for clothes to suit his style, and chased after him to take this picture (it was an action shot for me, that's why it's blurry, I was breathless after running up the stairs): 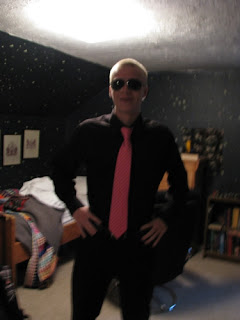 At Bible study last night, Nancy and I were talking about her work with special ed. kids, helping them tap out syllables for long words like "amphibian" and "carbonation."  Tertia overheard us and demonstrated the technique on the kitchen table; six taps for six syllables, but over the background noise we couldn't make out any English words, so we asked her to repeat it twice more before I finally deciphered: "Expecto patronum!"  She's been reading Harry Potter.

Happy 83rd birthday today to Grandma!  Your cake is cooling as I type this.

National Latin Exam scores are in!  Steve is going to help me fix the bulky excel file and teach me how to use it to crunch the numbers.  I think it would take less time to figure out averages manually, but he tells me this will be easier.  Hoping to make a big deal about it next Friday at Grandparents' Day.

Daniel received a great grade on his English paper and raves from the professor: "Excellent defense of a significant thesis."  I'll stop before I embarrass him too much.  He's going into production week of Seussical for Children's Theater.  He's a Who.

My former co-worker, David Kuo, has passed away after a long battle with brain cancer.  He accomplished a lot in his short life; check out his obituary in the NY Times.  Although I disagreed with him in his critiques of the Bush administration's treatment of evangelicals (comparing it to the blatant ridicule of evangelicals led by President Obama himself and prevalent everywhere now, the Bush administration seems like an idyllic golden age), he was a gentlemanly fighter.  My heart goes out to his wife and four children.

Even more sobering is the media blackout of the trial of Philadelphia abortionist Kermit Gosnell.  Utterly barbaric the crimes he committed; and beyond comprehension is the refusal of our news media to cover his trial.  I'll have more to say on this next week, but if you haven't seen the coverage, these links might give you some food for thought.  Kirsten Powers  Mollie Hemingway  Late to the party and trying to cover herself  At least World Magazine has been on this from the beginning.