Argyle Wednesday and Miles of Binding 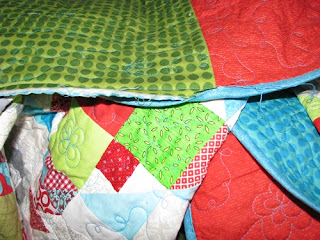 Not really miles of binding, but closer to 400 inches, or 33.3333 feet.  That's a lot of stitches.  The good news is that I only have one side, or about 100 inches, to go.  Before Saturday.  I want to watch TV and stitch this evening.  Other quilting news: I'm collecting signatures on the Cedar Tree auction quilt.  And I continue to organize my quilting scraps into strips, strings, crumbs, small chunks, foldable sizes, and yardage. 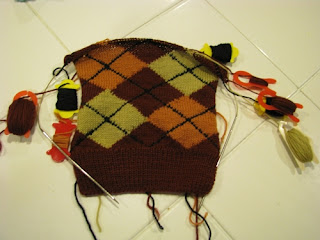 I am ecstatic to announce the return of the Argylefest 2012, which hibernated for more than a year while I knit shawls.  When I unburied it, I discovered that I had developed a hole in the knitting and the only way I could figure to fix it was to rip back about 10 rows.  Which I did, and picked up the stitches and continued.  I have now reached the point where I need to put half the stitches on a holder and work on the heel.  I think I can do this.  It's very different from my favorite method of constructing socks: it's knit flat, with intarsia (which is almost a swear word for some knitters), it will need to have lots of ends sewn in later, it will need to be seamed later, it's knit from the cuff down, and will ultimately require Kitchener stitch on the toes.  But I think I can do this.  I even enjoy the intarsia, as long as the bobbins don't get too tangled: 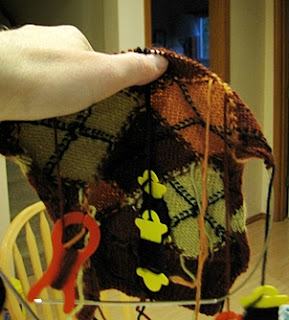 It is a good thing I practiced intarsia on dishcloths first.  But still, it is fun.  I could see making more of these.  I at least have to make one more... the matching sock!  I am still working on The Colossus Rises by Peter Lerangis.  And a few other books are going to help me with figuring out how to do top-down heels: Sock Knitting Master Class and Socks a la Carte.
I'll be linking up to WIP Wednesday and to Yarn-Along.

I'm impressed with both the quilt binding - that is a lot and the pretty argyle sock. Nice work.

That's a whole lotta binding! Are you making progress tonight?