It's that depressing time of the summer, when it's finally warmed up and stopped raining and it's a little TOO hot, when people start asking me, "So, when do you go back to school?" and when I've finished the fun stuff of the summer (Tour de Fleece, Ravelympics) and am left with a very messy house and lots of neglected chores.  And school starts too soon... but I'm not thinking about that!  Daniel and Steve and Secundus will be leaving for the great all-guy road-trip to take him off to Grove City College in 4 days, and he's not packed yet.  Right now he's hanging out with his future roommate and fellow road-tripper, and some of his classmates from Cedar Tree, and they are playing board games in the dining room and preparing to consume large quantities of flank steak stir-fry, which I also haven't prepared yet.  I have been sidetracked today by taking Tertia and Quarta to CYT camp, going grocery shopping (this was before I knew that 6 extra teenage boys would be added to the household temporarily), and by the fact that Facebook decided to change me over to the Timeline today.  So I decided if I had to be dragged into the second decade of the 21st century I'd at least try to upload a few relevant pictures to my timeline... and you know how it goes. 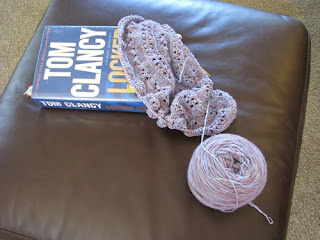 So, with the Fair and the Ravelympics behind me, I'm knitting at a more sedate pace once again.  This is Summer Flies, a lovely free pattern, in Dream in Color Smooshy in the colorway known as "Into the Mystic," which I think is the same exact shade as my hydrangeas.  I'll be linking up to Ginny's yarn-along.  Does anyone else see the humorous irony in knitting a lacy pastel shawl while reading a testosterone-driven thriller like Tom Clancy's Locked On?  I don't know, when it comes down to it, I think I may be more of a Tom Clancy thriller girl than a lace shawl girl.  It's been too long since I read one of his books.  This one was published just last year and is uncannily true to the geo-political situation while still having the same fictional characters I first started reading about 15 years ago or more. 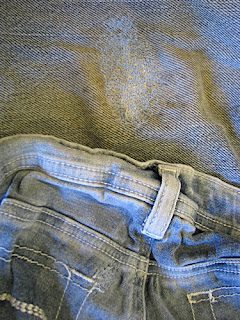 The only sewing I've done in the past week was yesterday, when I fired up the machine to mend Steve's jeans (at the knee) and Tertia's stretch jeans (at the fake pocket).  I used the method I outlined in my tutorial on darning jeans, if you're interested.  I usually link to WIP Wednesday at Freshly Pieced, but this is kind of boring and there was NO other sewing to report.  I need to get back to some quilting now.﻿
﻿
Posted by Kathy at 5:01 PM