Darn Those Jeans! - my first tutorial 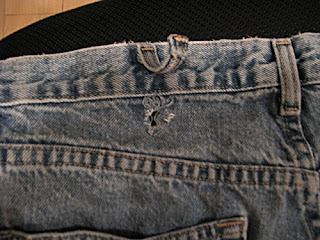 Here's my first ever photo tutorial!  If you have a sewing machine with a darning foot, also used for Free Motion machine quilting, it's a quick process and can add years of life to a beat-up pair of jeans.  Last week when Primigenitus was off looking at colleges with Steve I went through his clothes and found this pair that had a belt loop pulled free from the waist. 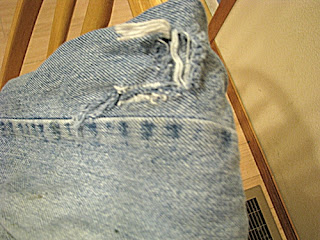 There was also a nice L-shaped tear on the upper leg -- not the knee where they usually wear out. 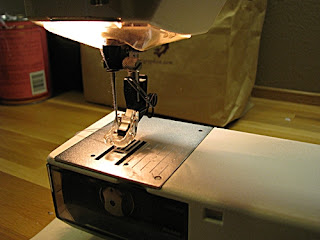 For this method the set-up of the sewing machine is important.  You need a darning foot or free-motion foot that is compatible with a zig-zag stitch, and you need to have a free-arm if your pants legs are going to fit under the needle.  The darning foot for my machine was a $20 purchase about 15 years ago ... best $20 I ever spent.  Even though I don't use it much for machine quilting anymore, it has helped me finish many quilts in the past, and this technique has saved probably hundreds of dollars in blue jeans... my menfolk are tough on their clothes!  Along with the darning foot, you will need to drop the feed dogs so that you control the movement of the fabric under the foot instead of it being fed through in one direction by the machine.  And you can't see it, but my machine requires you to set the pressure on the presser foot to the "darning" setting, which is the lowest possible.  This means the fabric will not be pressed tightly to the throat plate while you are working, but has lots of freedom for you to move it around. 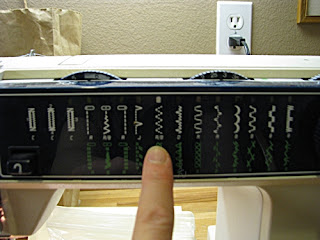 I like the 3-step zig-zag stitch for this technique.  Set the widest stitch width.  Stitch length doesn't matter because you will be controlling that yourself.  Just be sure that your free-motion quilt is wide enough to accommodate it! 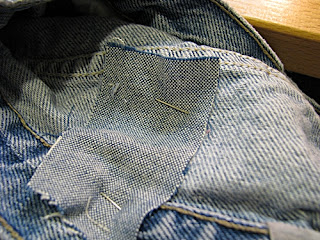 You will need a patch to back the hole and serve as a foundation fabric.  It should be about 1/2" larger on all sides than the hole.  It doesn't matter if it's not the same shape: you'll trim any excess away afterwards.  I usually use denim scraps, but couldn't find any since I cleaned out my sewing room so this is a scrap from an old chambray shirt or jumper.  I used two pins to hold it in place from the front: 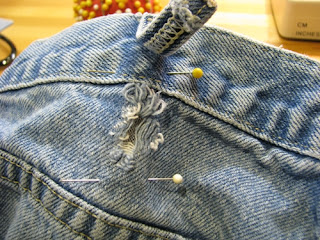 I tackled the smaller hole at the waist first.  It can be a little tricky to maneuver the bulky set-up under the presser foot: 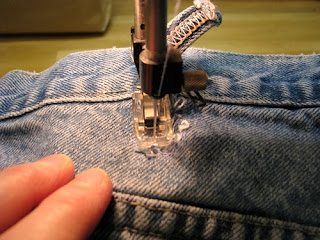 Once you get it flat, and make sure the pins are holding the patch in place on the back, lower the presser foot.  It will seem like it's the same up or down, but your machine won't work if it's up!  Bring the bobbin thread up and take a few stitches that take bites from both the patch and the edge of the hole.  The motion of the 3-step zig-zag will be left-right, but your own hands will control forwards and backwards motion.  Once you get used to this motion, you can pick up the speed.  Just be sure you remember where the pins are and remove them once you have enough stitching in place to hold the patch in place!  I used a light blue polyester thread this time: cotton thread would be fine too.  I keep going with the stitching until the entire surface of the former hole is covered with stitching.  It's like creating a new fabric over that spot. 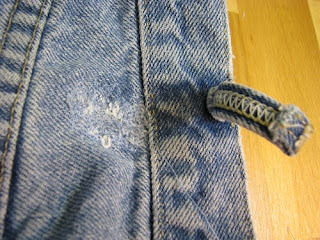 The blue thread blends in nicely with the denim fabric.  Once the belt loop is sewn back down you'll hardly be able to notice. 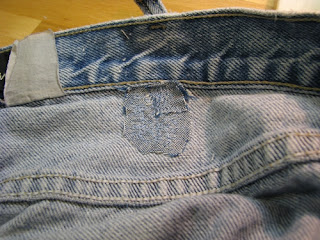 This is how it looks on the back after I trimmed away the excess fabric from the patch. 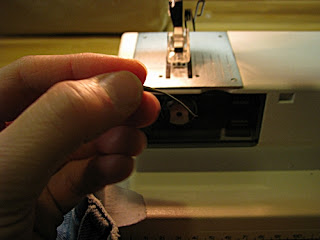 True confessions: I broke two needles, both when sewing down that bulky belt loop.  You do need to be careful not to tug the jeans in any direction too quickly, especially when sewing over a bulky area.  I took a break and gave my machine a good clean-out, which it needed. 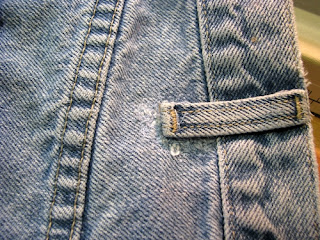 And I eventually got the thing sewn down.  It looks almost as good as new! 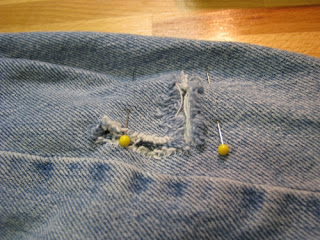 Then it was time to pin and sew the second hole.  I trimmed off some of the loose threads that were sticking out from the hole and would just have gotten in the way.  Since this one was on the actual leg, it was a lot more challenging to tug into position over the free-arm. 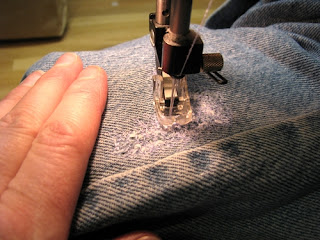 I find it difficult to take pictures of my hands while they're sewing.  This is a still shot.  The technique is the same: back and forth and up and down until all the edges of the hole are attached to the backing patch, and then all over until a new, firm fabric is created. 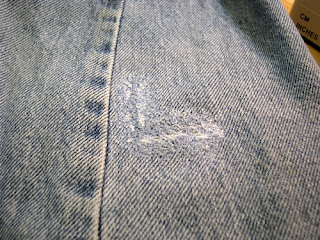 And here it is finished on the outside. 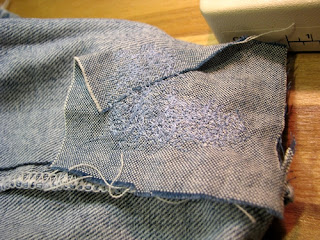 And on the inside... oops, the patch got folded over.  No worries: the stitching will hold it tight through many washes and the edges will fray and soften after they're trimmed. 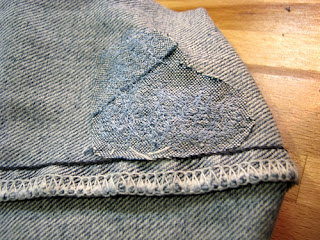 Here it is trimmed.

And all done!  I wonder if Primigenitus has noticed that his jeans are fixed yet.  I think these are the only pair without paint spatters on them from last summer.

If you use this tutorial I hope it helps extend the life of your blue jeans and saves you some money.  And I'd love to hear back from you if you do.  Thanks for stopping by!

Clever mending techniques..thanks for the ideas:)

I'm going to bookmark this. I think it'll be really useful to me. Thanks for sharing. I'll let you know how it turns out.

Visiting from Sew Many Ways,
Nikell

Thanks for this I am motivated to hem my jeans now. Thanks

GREAT tutorial! I'm gonna have to get one of those darning feet!