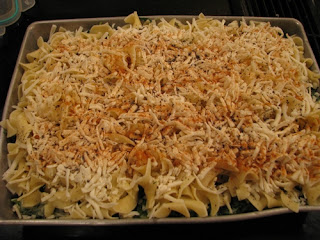 It's the time for spring greens and early harvests from the garden, so I'm sharing one of our family's favorite recipes today.  All of the kids like it, except that the 2 girls don't really like the way I made it yesterday, which was with half mustard greens instead of all spinach.  But I used the mustard greens anyway, because we have a lot of them and they're just going to reseed themselves soon.  With us just picking up our first basket of the season from Grace's Garden, I'm pretty sure we're going to need to cook a lot of greens recipes.  This is one that works very well as a main dish.  It doesn't seem to matter to my meat-loving boys that it's vegetarian. 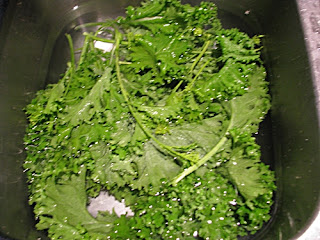 I uprooted two plants of mustard that were growing wild by the blueberry bush and got a really big bunch.  I chopped it and cooked it in water, then picked up the rest of the recipe as usual.

2 8-oz packages frozen, chopped spinach (I used 1 package plus the aforementioned large bunch of mustard greens)
1 can cream of mushroom soup (you could get all foodie on me and make your own white sauce, but this is what I use.  I'm plebeian that way.)
Seasonings: Fines Herbes or Tarragon, garlic powder, seasoned salt, pepper, oregano, onion powder - all to taste
shredded mozzarella or Swiss cheese - about 2-3 cups
wide egg noodles - about 8 cups
paprika
poppy seeds

Cook the greens and then drain them; add the can of soup, and season to taste with seasoned salt, fines herbes, etc.  The fines herbes or tarragon adds a very faint licorice taste that works well with spinach and makes you think of elegant French dishes.

Meanwhile, boil the noodles in plenty of water until al dente.  Drain them and put half of them in a greased or Pammed 9x13" casserole dish.  Cover the noodles with a layer of cheese, spread the spinach/greens mixture on top, and then top with the rest of the noodles and another layer of cheese.  Sprinkle the top with paprika and poppy seeds.  Bake at about 375 degrees for about 25 minutes or until heated through and sufficiently melty.

Despite the fact that this looks like something that Calvin's mother (of Calvin and Hobbes) made him eat against his will, this is really tasty.  If you teach your kids young to eat it, they will grow up loving it.  It was on the menu at Primigenitus' 1st birthday party, and has been a favorite ever since.  I am not making this up!
Posted by Kathy at 4:31 PM

Hubby loves spinach and what could be bad with cheese? Will definately be trying this. Thanks for posting it!