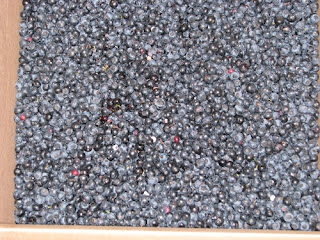 Blueberry picking today in Woodland.  We got lots!  Now to get them into the freezer.  There will have to be a break from the orange knitting, I guess.  Cleaning and freezing and maybe making jam and syrup.  Lots of blueberry pancakes in the future!  I hope we can keep them cool until we have time to process them all.  Typing this at 11:30... we have 5 gallons in the freezer so far and about that much still to do another day.  This is one of those times I'd like to have an extra fridge.

Random Olympic observations before I crash:

No matter how many times the NBC announcer says it, "three-peat" is not a word.

I thought women's gymnastics was the only sport that included eyeshadow and sparklies in the hair.  I think that's still true... but the women sprinters look very nice in lipstick and earrings.  But don't get me started on beach volleyball.  Let's just say I think it was poetic justice when they had to cover up because of the chilly British climate.

I suppose we should all be glad that China is now focusing its collectivist, machine-like energy on trying to rake in as many athletic honors as possible rather than mowing down innocent citizens with tanks.  They can have the trampoline and the synchronized diving and my personal favorite sport, table tennis.  But throwing a badminton match?  When most people didn't even know badminton was an Olympic sport?  I'd say that denigrates the true meaning of the Olympics far more than any knitter could ever do.  All Chinese badminton athletes should be immediately disqualified from competition in this and future world-class badminton events for the next 20 years.  It's just unconscionable.

I agree about the volley ball. They spent half of each game picking their bottoms out of their butts. How attractive is that?