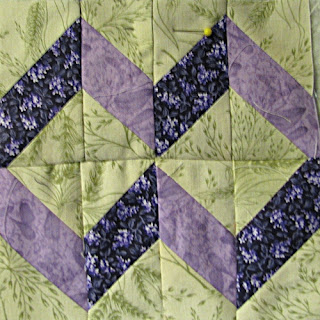 I'm linking up with Freshly Pieced once again for WIP Wednesday.  This week I got two Farmer's Wife quilt blocks done.  This is block #74, Ribbons. 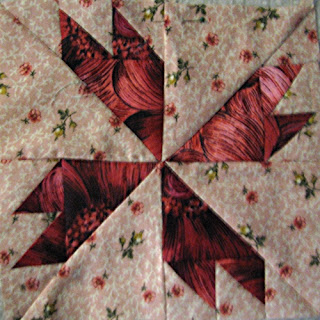 I spent a lot of time this week working on Bonnie Hunter's Orca Bay mystery... here's the one post so far, and I'll post another one tomorrow.  It's a little bit like "if you give a mouse a cookie..." because once I started working on my scraps, I also started wanting to organize my scraps into Bonnie's Scrap User's System, and so I started happily cutting 1.5", 2", 2.5", and 3.5" strips and squares out of all my random scrappiness.  That's a project that's going to take awhile, but it's fun to do in between sewing bursts.  I've really been getting a lot of scraps cleared out with all the tops I've pieced in recent months. 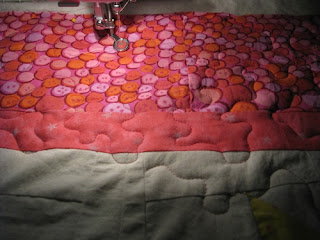 My happy progress came to a screeching halt when I loaded my STARS quilt onto the Mega Quilter and tried to quilt it.  The machine was supposed to be fixed, but there's something wrong with it still, because it can't sew more than 8" in my preferred thread before the thread breaks or forms loopy messes on the back.  I'm disgusted with it and ripping out all the small progress I had made so far.  At the moment it still works semi-well with a plain off-white thread, so I'm going to try again to finish the top using that thread, and then I'll probably lug the thing back to the dealership and demand satisfaction.  There's really no good reason for the machine to be that temperamental. 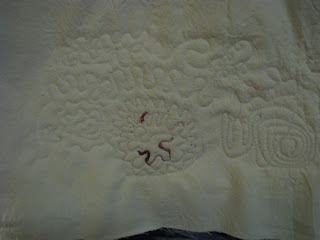 I don't really have great pictures to share this time.  Oh well, soon I'll be collecting signatures on my Crumbs quilt top and there's still lots more fun to come in Orca Bay. I like piecing so much better than quilting anyway.
Posted by Kathy at 3:50 PM

I love the quilt blocks...isn't it fun to learn something or try something new! Have you checked the bobbin tension on your machine? I know when I switched threads, I learned that that can throw the tension off. I found out through Googling how to fix it. Hope the next round of quilting goes better for you!