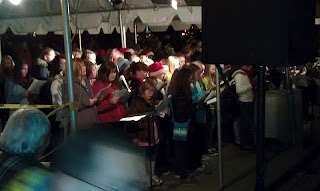 Tertia was one of many voices in the combined choir of the Vancouver School District singing at the Christmas tree lighting at Esther Short Park yesterday evening.  The Columbian article is here; no pictures of her, unfortunately, even though she was right next to the podium in the front row: she had to stand still while the Mayor spoke right next to her, and was the most excited person on the stage when Santa showed up.  They sang a lot of carols, sacred and secular, and she kept up with the music except when she looked up to see us and got distracted. 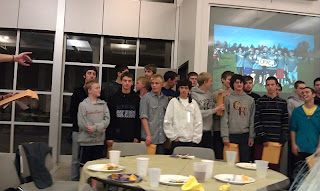 Secundus received his letter in Cross Country for Columbia River High School at a banquet this last week.  He had pretty good times, although not quite fast enough for the varsity team, which went on to win eighth in the state.  He made some good friends and seemed to fit in well with the athletic crowd, even though he doesn't study at their school; it's nice that students at private and home schools can caucus with the public schools for sports.  We're hoping he can compete in the Spring Track season as well. 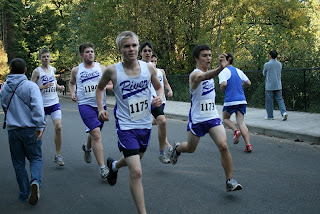 I'm glad not to be driving Secundus to CC practices daily now, but this coming week will be a nightmare of scheduling with late practices for Primigenitus in the Madrigal Feast.  And just about every weekend from here until Christmas, we're double or triple-booked.  I received a scolding call from the dentist's office yesterday and am avoiding the scheduling hassle with various medical specialists the way some people avoid bill-collectors.  And while the pantry moths seem to have been eliminated, the fleas keep coming back and I'm short on the energy and time needed to go after the areas around the cats' bedding and litterboxes.

I miss the idyllic and peaceful lead-up to the holiday that I remember from my childhood... maybe one or two extra events beyond the usual, staying home most evenings and watching TV, one trip to Rolling Acres Mall (back in the 80's before its current notoriety in the Craigslist serial killings, it was actually a pleasant place to shop).  I remember putting up the Christmas tree and staying up late to make presents or cookies, and it was all so fun.  Or maybe my mom just did all the work and never complained about it... probably the most likely.  This year, I'd just like somebody else to do Christmas for me.  I've been feeling like "something's gotta give" since September, and since school is non-negotiable, I guess it will have to be Christmas.  That's okay with everybody, right?  I'll just be hanging out at home, knitting and quilting.  I'll help with cooking, and a little cleaning, but no shopping.  And no scheduling, carpooling, or phone calling.  Now that's an introvert's idea of a Merry Christmas.
Posted by Kathy at 1:39 PM