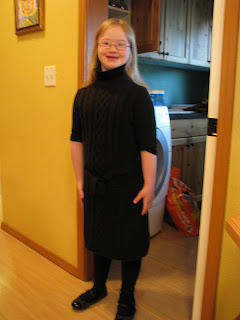 This little girl got to sing in the choir at the Veterans' Day assembly at her school yesterday morning.  She was very proud in her new black dress and shoes.  She has worked very hard on blending with the choir and not singing everything at the top of her voice.  I wish I had been able to hear her, but of course that's right during my own teaching time.

We are still trying to sort out her math, though.  She's supposed to be in the Learning Support classroom for math, but that classroom appears to be swamped with a lot of kids needing all the attention of the teacher and aides, and they can only teach the 6th grade curriculum in preparation for the state tests; Tertia is not working at 6th grade level and we couldn't care less about the tests, so she gets packets of worksheets at her grade level from the Life Skills classroom.  But right now, it doesn't appear that she's getting ANY instruction in math, and that's going to have to change, however we address it.  She's established in her schedule and really likes school, especially the classes that she's fully included in.  I'm putting off sending an email to her teachers to try to figure out what to do about math, but it has to happen.

The battle against the pantry moth infestation continues... the big pantry was even worse than the small one I cleaned yesterday, and the worms were in all the little crinkles of the plastic bags and, for some weird reason, even in cardboard boxes used to store appliances we don't use that often.  Steve pulled all the sealed packages and put them on the table this morning while I was at school, and we worked all afternoon, wiping down and vacuuming the shelves.  And then vacuuming up the little escapees every 20 minutes or so.  And to think I've been puzzling over all the moths I've killed in the last several months: I thought they were wool moths and I've been pretty diligent protecting my fiber stash, when all along they were having a party in the far reaches of the pantry.  Well, tomorrow I'm off to hunt for sticky traps with pheromones to attract the male moths... we're going to break this cycle!
Posted by Kathy at 6:34 PM