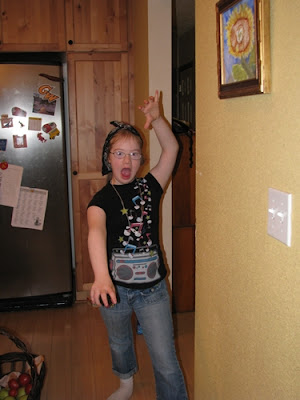 When only one kid in your family attends the public schools, she has some experiences you might not have thought of giving your other kids.  They aren't necessarily bad experiences, just different.  For example, at Tertia's school, the dance teacher likes to do a presentation of Michael Jackson's "Thriller" every October.  This is Tertia's second "Thriller" performance and she's getting pretty good at it.

Unfortunately I was unable to attend the assembly yesterday because I was in the midst of parent-teacher conferences at Cedar Tree.  But I read the memo about the costume and it said to wear black/white costumes.  She was all set to wear pink because it was also "spirit day", but I talked her into picking a black or white top.  Specifically, she really likes the Hello Kitty boombox shirt, which is just her style.  Last year she came home with a little bit of green makeup on her face (for the zombie effect). But this year there was no makeup, and I'm just as glad.  Tertia doesn't like zombies: she says they are "creepy," but she knows they aren't real.

In the "Thriller" dance routine there is a particular dance move that I understand is called a "booty bounce."  I was a bit shocked at this the first time Tertia demonstrated it, but I told her it's fine in dance but not to talk about it at other times.

There's a joke going around in the Down syndrome community about the aptitude of our kids for dance: they have "Get-Down syndrome."  And it's true.  Tertia has a real gift for dance moves.  She is also the only member of our family who can dance the Macarena.

Email ThisBlogThis!Share to TwitterShare to FacebookShare to Pinterest
Labels: 31 for 21, family, random