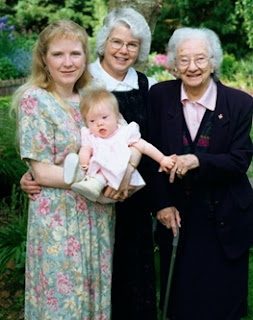 Four generations, Spring, 2000.  My daughter was supposed to be born on her great-grandmother's birthday, but she came early, September 26.  My birthday is October 11, my mother's October 12, and my grandmother's was October 8.

When my grandmother was a girl, in rural Ohio in the 1920's, she said she thought there was a family with a child with Down syndrome somewhere in her county.  "I suppose they just kept him at home, quietly," was her remembrance.  If so, the child was fortunate.  During that time of the Eugenics movement and for a long time afterwards, children with Down syndrome were known as "Mongoloid idiots" and were routinely signed over to large state institutions at birth.  There, subject to untold abuse and neglect, they lived out their usually short, sad lives.  Very few Americans were really aware of such institutions at all, because disabilities, particularly mental disabilities, were seen as shameful.  There was no such thing as informed consent; individuals with disabilities were routinely sterilized, and there was no attempt to educate them or integrate them with society.  As bad as it was in America, we of course stopped short of the widespread atrocities in Nazi Germany, although the lack of scrutiny received by these institutions insured that bad conditions here would last far longer.

When my mother was a girl, she was a big fan of Roy Rogers and Dale Evans.  They had a child with Down syndrome, and defied societal expectations by not institutionalizing her, and even wrote a book about her short life, Angel Unaware.  Although her life was short, she had the benefit of being very much loved and accepted in her family.  Institutionalization was still the silent norm for most Americans with disabilities.  There was a strong, unwritten expectation that people with disabilities should not intrude on the public consciousness.  This expectation was most likely from both sides of the political spectrum, which was far less polarized then than it is now.  The people of America were decent, well-intentioned folks, but they disliked to be disturbed.

When I was growing up, people with Down syndrome were no longer routinely institutionalized, and great strides were being made in education and inclusion.  Yet paradoxically, the highest-profile case of Down syndrome I ever heard about involved the infanticide of a newborn child at the parents' wish-- an atrocity so much worse than anything I had encountered in America before that it left a deep and lifelong impression.  It was the case of Baby Doe in Bloomington, Indiana in 1982.  He needed relatively minor surgery to allow him to eat, but his own parents refused the surgery, presumbably because of his Down syndrome diagnosis.  The child slowly starved to death surrounded by the best medical technology in the richest country of the world, despite thousands of offers to adopt him.  Anyone who has ever heard Steve Taylor's haunting song can never forget it:

So the unthinkable became thinkable, and our country was further polarized, gradually reaching the point where prenatal tests for Down syndrome have become standard and abortion rates approach 90%.  And although both my grandmother and mother both started out as populist Democrats, they both reached a point later in life (my mother earlier than my grandmother) where they realized that the Democratic party no longer represented their concerns as Christians.  Political allegiances are complicated and I'm not trying to strongarm anyone into changing theirs, but in my experience, it was impossible to reconcile the conflict between the Democratic party's official policy of abortion on demand for any reason, and the desire of all decent human beings to do the right thing for vulnerable individuals.  Baby Doe was one of those moments for both my mom and me.  I remember at least one conversation where we both agreed we would be willing to adopt a child with Down syndrome, to save it from a fate like that.

Five years before my daughter was born, Al Gore made his little "extra-chromosome right wing" remark.  I remember looking up from unloading the dishwasher in shock when that came over the radio.  "If I had a child with Down syndrome that would be so offensive..."  It's another one of those semi-prophetic moments I look back on now.

I've had good people, well-educated and some with medical degrees, ask me why I even mention infanticide and abortion in connection with Down syndrome.  The implication is, "You love and want your child, you would never do this, so why concern yourself about what others choose?"  Well, for the same reason that John Donne said "ask not for whom the bell tolls."  Every time a child with a mental disability is denied basic human rights because of her mental disability, don't you think it affects the entire community?  Don't you think it makes it that much harder to gain recognition for the real needs associated with this diagnosis?  The desire to pretend that the intentional genocide of people with a particular disability is not happening is strong... it helps us feel better about ourselves and the country we live in.  It's less disturbing that way.  But it's not right, and it's not true.

Infanticide of newborn children with Down syndrome, and other disabilities, still happens.  The congressional testimony of Jill Stanek tells of an incident in 2001 at the terribly mis-named Christ Hospital in Illinois.  At this hospital, more often than you'd think, late-term abortions were performed by a method that allowed the fetus to be born alive, although very premature.  At this point, the infants, already born, were left to die.  More often than you'd think, this took hours.  It was hard on the nurses, to say the least.

At both the federal and the state level, a Born Alive Infants Protection Act was introduced to provide the smallest measure of legal protection to a child like this.  There was overwhelming support for this legislation.  But on three separate occasions, while an Illinois state senator, Barack Obama voted against it.  This is why you will hear (although never in the mainstream media) the charge of "supporting infanticide" leveled against the President.  Although he has tried, he has not been able to refute it.  And this is a fundamental reason why, no matter how "likeable" the President may be, I could not in good conscience support him.

Again, it would be a fair charge to say that I am "personalizing" the political issue.  I'd have to plead guilty.  This is very personal to me.  My daughter's birth did change the way I look at things.  I need to be more vigilant with her than with my other children, just to protect her and make sure she develops the skills she will need in life.  To have one class of people with Down syndrome, loved and wanted and included in society -- I think we all agree that this is a good thing.  But to have a secondary class, discriminated against solely because of their disability and status of being unwanted -- this is unconscionable in a society that values human rights.

Email ThisBlogThis!Share to TwitterShare to FacebookShare to Pinterest
Labels: 31 for 21, down syndrome

Cathy, both Emma and Amanda have had a huge impact on my life. My relationships with them have brought me nothing but joy.