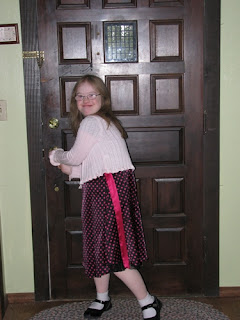 I'm honoring my daughter (Blogname: Tertia) and raising awareness about Down syndrome this month in the 31 for 21 blogging challenge.  I've blogged every single day so far in October!  Most of the posts have not been about Down syndrome particularly, because I really do see it as just one aspect of my life.  But today I'd like to describe what a "typical" day for Tertia looked like.  This might help someone who has a very young child with Down syndrome and has fears or questions about the future.  At the least, it will be something I can look back on in future years to remember when she was this age.

At 6:45 this morning I flipped on the light in the girls' room and started the sometimes lengthy process of getting them moving.  Tertia is 13 and is not particularly a morning person.  I let them get used to the idea of getting up a bit gradually, but Thursdays are our super-busy schedule days, and I really needed them downstairs, eating breakfast by about 7:15 so we could pile in the car at 7:40.  Tertia came down around that time, dressed in capris and a pink Disneyland t-shirt.  This is pretty typical for her; she also wears light-up Skecher shoes with orthotic inserts for her feet, and bumblebee black and yellow ankle socks.  She has a smile on her face most mornings even if she is slow moving.  She selected leftover salad with Creamy Caesar dressing and some yogurt for her lunch, which I then assembled for her.  I filled her water bottle, then poured her juice for breakfast while she prepared her bagel.  When I remember, she also gets some Nutrivene D vitamin supplements with her breakfast -- I have fallen far behind on giving her the second dose every day in the evening, so in effect she just gets a half dose daily.  She can take capsules easily; has been able to since she was about 3.

We successfully piled into the car and Secundus drove us to Cedar Tree.  Teachers meet on Thursdays for prayer and Thursdays are the day I don't have a car pool, so I'm going to prayer meetings for the first time, and it's working out as long as I don't have to do it every day.  Tertia plays with the other early kids at the turnaround, soccer and basketball.  At 8:10 she sees me waving and comes running, after waving a cheery goodbye to her friends.  I'm hoping her presence there for this short time every week will make these privileged, private school kids a little more sensitive, and maybe I won't hear the "R-word" from them.  I don't very often, but you can be sure I go ballistic when I do.  The two of us drive back home, Tertia reading Harry Potter and the Goblet of Fire in the front seat next to me.  I ask her what's happening and she says something about Quidditch... and I ask absentmindedly, what houses are playing?  She says, they aren't at Hogwarts yet!  Oh, this is the World Cup, I say.  Yes, the World Cup, she says.  Later on in the drive she tells me that Ireland won.  She reads with the bookmark marking the line, at a pretty good rate.  I think she probably skips words, but I don't know... her phonetic reading ability is almost uncanny sometimes.  Comprehension not so much, but she does okay.

At home we have just enough time to finish packing her things before we have to go outside and wait for the bus.  Tertia really wants to kick back and relax in her room, but I won't let her and she comes down,  a little sulky and grumpy, and I hustle her into her jacket, grab her backpack and we go outside.  Our house is on a busy street and the bus driver is a sub today... I want to be sure she won't get missed.  The bus comes right around 8:40; she gives me a kiss and boards the bus with her usual smile, sulkiness forgotten.  The other 3 or 4 riders are all boys.  The bus has at least one more stop before heading off to the school.

At school Tertia is in an Intensive Academic Special Ed. classroom, as opposed to the Developmental Special Ed. classroom next door.  Apparently she is one of the "high-functioning" ones in her class.  I have a lot of thoughts about this, but I'll need to save them for another day.  Her class includes 6th-8th graders, and she is the only one in it who has Down syndrome.  Her teacher is a lovely, patient, and hard-working woman.  All the public school teachers we have dealt with have been lovely, patient, and hard-working.  They pour themselves into their students and they must spend countless hours doing soulless paperwork.  First period they usually do some study skills or a little bit of science. Second period Tertia goes with a few other students to a 6th grade general ed. "World Studies" history class, where today, they had a test on the peoples of the stone age.  This is her sole "academic" general ed. class; there is an aide who assists the special ed. students and makes sure they receive the adaptations they require.  Third period is dance (she has to change in the locker room), then I think she has lunch, and then 4th period is choir.  Both of those classes are in general ed., and she had both last year as well; other students are kind and accepting of her from what I hear.

The rest of the day she is in the IAC classroom, for math tailored to her level, language arts (the curriculum is very simplified, but we have requested that she be allowed to read challenging books of literary quality -- she's working on The Lion, the Witch, and the Wardrobe -- with the assumption that she will write book reports on them) and "social skills".  I feel more or less satisfied with her curriculum, but it's hard to know what it's actually like when I have to be off-site teaching her grade at a completely different school.  Sometimes it's a bit schizophrenic.

She comes home every day around 3:45; waves goodbye to her bus buddies and comes and gives me a hug.  After being around people for so much, I think she needs to decompress.  She likes to hang out in her room where she reads or waves pencils around.  This is a self-soothing behavior she has and I figure it's better than sucking her thumb, which she is trying to quit.  Sometimes she will make up imaginary stories, pretend she is a school teacher, or even carry on conversations with herself or her imaginary children.  She rarely naps after school but will often ask to watch a favorite TV show.  I'll let her do it if her daily chores are done.  This week she's supposed to unload the dishwasher, but she's been pokey about it, so it doesn't get done until I'm fixing dinner today.  I had to take the van into the shop and wasn't able to supervise/nag her about it earlier.  She enjoys Mexican mountains along with the rest of us for supper, and after some ice cream for dessert she makes her way upstairs to take her shower.  Some of us are planning on watching the Amazing Race episode we taped a few days ago, but Tertia is not really interested in this program.  She prefers to take her time with a long and leisurely shower, singing karaoke at the top of her lungs.

In the last few years she has become quite independent about most things, and I'm very glad about that.  It doesn't really bear thinking about what it would be like if she wasn't independent... we haven't really given her any other options because we don't have any!  She will always need help with some aspects of life, but with a loving and supportive family that is not a big obstacle.

Email ThisBlogThis!Share to TwitterShare to FacebookShare to Pinterest
Labels: 31 for 21, down syndrome, family, schedule, school