The Saga of the Feral Housecat... and Yarn-along 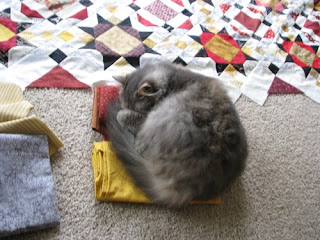 This is Muffball, the feral housecat, when she is on good terms with her humans and not on the defensive. She came to us as a stray, and let's just say she has trust issues. She doesn't like to be around people unless it is on her terms, and the humans are seated and not looking like they are going to try to corral her and take her to the vet.

That is exactly what I did on Monday; she had a raging case of fleas a month ago that needed a cortisone shot... but that did the trick, that and giving her the proper dose of flea medicine. This week was the checkup and catching up on basic vaccinations. But to go to the vet, I have to pick up a wary cat and put her into the cat carrier. This was much harder than you would think a month ago; Monday, it only took two tries, but she was so spooked that she peed on the kitchen floor, and my leg, as I was getting her in. She complained very loudly all the way to the vet, where she got shots and $60 flea collar ("it's a bargain because it will last for 8 months.") It took 3 people to put the collar on her Tuesday, after she had recovered from the vet trip and even been a bit affectionate to her humans; she peed on the Persian rug in the process, but we got it on her. We weren't able to clip off the extra length, but we called it enough for one day. She was even mildly affectionate yesterday evening, as we watched The Crown. 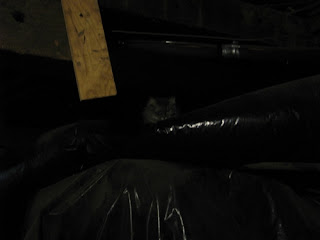 But today she slipped back to the basement after a quick breakfast, and was invisible most of the day. This is what a feral housecat looks like, sitting on a heating duct (and cutting off the heat to the upstairs in the process) in the narrow crawl space under the oldest part of the house. Humans do not go back there, not if they can help it. 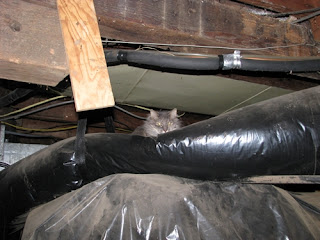 With flash, it looks even more spidery. (Warning to my boys, Christmas spoilers ahead). 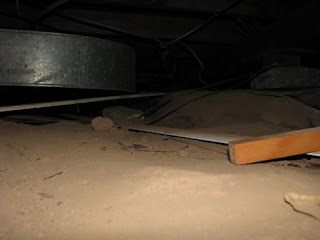 I do not think the collar is here, but if we could find it and try putting it on her again in a few days... 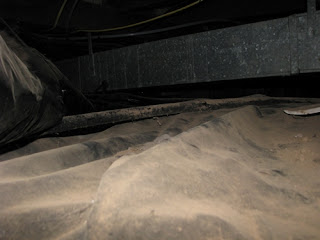 But I sure don't want to crawl back there. Frustrated, I spent a little time cleaning other parts of the basement this morning and afternoon. I have a pile of things to give away and maybe it's time to get rid of the crib and crib mattress too.

So here below is my entry for this week's Yarn-Along. The socks have advanced since a few weeks ago when I had just finished the first pair and cast on the toes. I have now turned the heel and am a third of the way up the leg. So both boys should have Stashbuster Spirals socks for Christmas. I am currently reading Death of a Nurse, the recent Hamish MacBeth mystery, and listening to an audiobook of Gone Girl. 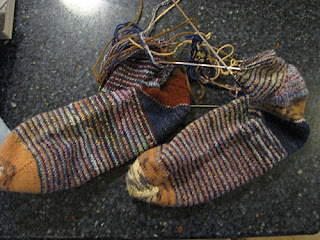 Here's hoping that the missing collar turns up somewhere easily accessible, and dear little Muffin decides to be sweet again and go back to sleeping on the couch.
Posted by Kathy at 5:19 PM

Always enjoy seeing your progress with the mystery quilts and knitting projects. i am happy to read the clues and just watch what you "real quilters" are accomplishing. I stick with the small quilts - table runners and mats, pot holders, and coasters. occasionally, I can manage a wall quilt. I have been following the Just Sew group with their garment sewing. Tell Grandma I like her leaf quilt.