Christmas was great, and went by fast. We were able to get someone at church to snag a picture of the whole family: 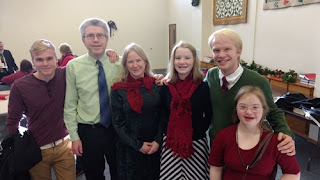 And Steve took one of the kids. That's pretty much it for family photos this year, everyone is in such fast transition. We only have the boys for a few more days, and it may be quite some time before Daniel gets back. 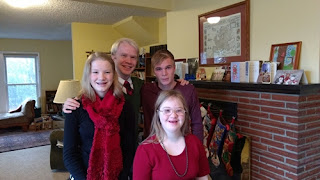 It has been harder to get multiple blog posts in a week this year, so excuse me for sneaking in family photos. But for some reason, Christmas season also kickstarts my lagging quilting and knitting, and I like to document them on the blog. First up is the En Provence Mystery quilt, and I'm linking up to Bonnie Hunter's blog with lots of other people sharing their progress: Part 5 Link-up 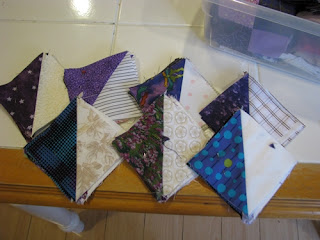 I was able to get clue 5 done pretty easily. My purple stash is pretty well depleted at this point. 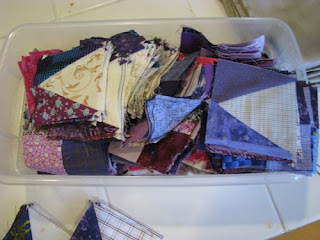 I have the pieces for the mystery quilt in a small storage box, and since I finished this week early, I decided to work on some other sewing projects that had been lying around. 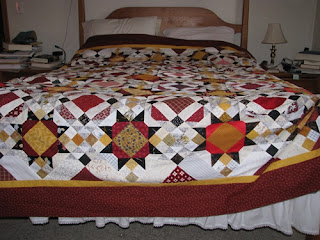 Everything except the borders of Allietare had been done since last January, so I finally trimmed the edges and put the borders on. I think it's just a stunning quilt pattern, and I'm really happy with how it turned out. 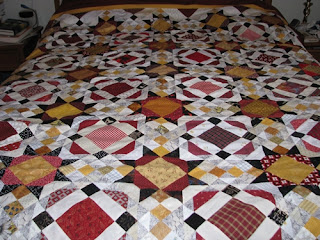 You can't see it, but Orca Bay is underneath it on our bed. That was the first mystery quilt I did and I've been hooked ever since. This is the sixth straight year I've joined in. If you are happening to hear about this for the first time, you have a chance to get the clues for the current mystery still, at the website linked above. And you want to grab them while they are freely available, because Bonnie takes them down at some point so they can be included in a future book. I never thought I'd enjoy doing mystery quilts so much, but these are really quite addictive. My only concern is that I've fallen way behind in getting them quilted. 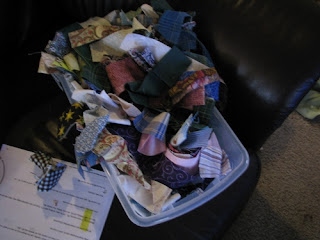 The other thing Bonnie got me hooked on is organizing my scraps. I still haven't perfected it, but I have been cutting strips of various commonly used sizes as I have different fabrics out, and today it was time to organize my 1.5" strips. Here's how they looked midway through. The box was completely overflowing when I started. 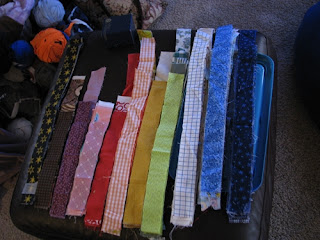 Here's me laying them out in color groups, 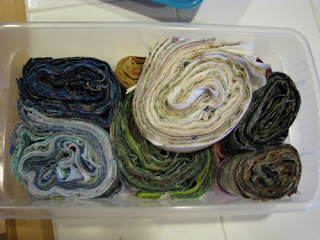 And here they all are, fitting into the same bin neatly with room to spare! It made me really happy to get this done today! I'm partway through with the 2.5" strips as well. The 2" and 3.5" strips had to be organized to do the previous steps of the mystery quilt. 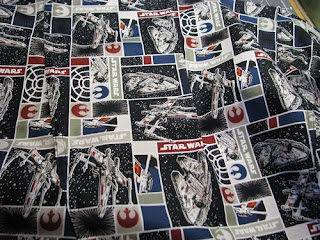 One other bit of sewing got done today. It was sad, considering the untimely death of Carrie Fisher, but I threaded up my machine with black and went ahead on these Star Wars boxers for Steve. I had wrapped the fabric for him, with the promise to sew it up after Christmas. Got it all done today, start to finish. 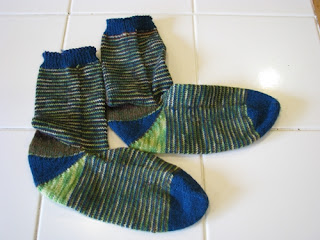 And both boys were very happy with their handknit socks... they put them on right after unwrapping them. 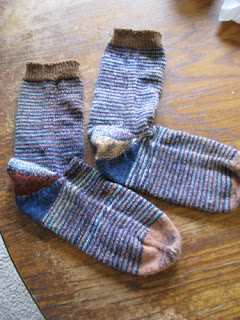 So they fit, the boys like them, and it looks like I could knit socks and sew boxer shorts and my menfolk would be happy for Christmas presents and birthday presents. Seems like a pretty good deal to me! I still wish I could figure out that trick like they do in Harry Potter to make the needles knit by themselves, though. It takes me about a month to knit a pair of socks.
Posted by Kathy at 8:36 PM

It looks like you have been busy! Bonnie's mystery quilts are always so much fun to do. I will be making my HSTs for clue 5 today!

Your version of Allietare looks fabulous, mine is still in pieces in tubs while Orca Bay never got started. (clues are saved) I just watched everyone else's progress. I agree its highly addictive.