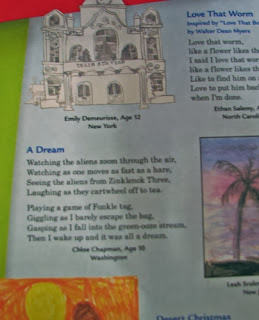 So Quarta got her big break and was published in Highlights Magazine this month, in the "Our Own Pages" section that she has been submitting artwork and poems to for some time now.  She has a quirky alien theme going on with her artwork and poetry.  They chose to publish the poem without her artwork, but I'm sure I could probably talk her into illustrating the poem, just for this blog.

It's good that I have Quarta and my mother-in-law to supply creative material for the blog, because my own creativity has been at low ebb lately.  That is almost 100% down to school, of course.  Finals week/ grading week is enough to kill imagination dead, for anyone.  I did get my grades calculated and turned in, and new material prepared for the second quarter, but not much else.

Secundus' truck, Francesca, is no longer operable.  Her brakes were completely shot and it would cost far too much to fix them in addition to the other issues she has.  It was a sad 17th birthday surprise for him, but he is facing it stoically and hoping to get out of debt in the next month or so.  He did get to go to State as a varsity alternate for his cross-country team last weekend.  He is still eating like an athlete, grazing at all hours.  But he discovered firsthand when he was responsible for buying his own food how expensive almonds are and why I don't like it when he eats 2 pounds of them in a week.

Tertia is entering the busy season at school, with lots of choir events coming up, all of which seemingly need permission slips and insurance information filled out.  We said no to her going to a basketball team this week between the staffs of her middle school and another one -- she would have loved to dance her routine at halftime, but we were overbooked and had to draw the line.  There will be plenty of other events in the next month though.  I saw a Facebook meme today with 2 contrasting attitudes towards the onslaught of the Christmas season -- my personal one is definitely Theoden's grim, "So it begins."

I may not be getting much knitting or sewing done, but I have been playing the "Rhyes and Fall of Civilization" mod on Civ4 Beyond the Sword, taking my turn at each one of the civilizations.  My best so far has been when I played as the Greeks, and won a historical victory by being the first to discover literature, drama, and philosophy; building the Oracle, the Parthenon, the Colossus, and the temple of Artemis; and by being the first to circumnavigate the globe.  I'm not really sure how historically accurate that last one is, but I did it.  With random outbreaks of plague and barbarian uprisings and the odd glitch, it can be a frustrating game to play, but some good old-fashioned imperialistic violence really helps me deal with the stress of teaching sometimes.
Posted by Kathy at 9:36 PM